33 replies to this topic

Considering how much I loved my recent dinner at Cosme, you can imagine how eager I was to try Enrique Olvera and his New York sidekick Daniela Soto-Innes's new venture, Atla.  Having failed to make Cosme the casual restaurant they initially planned, they have made Atla more of a mezcal-and-tacos type of place.  But the food is much more imaginative, and the menu much broader, than that suggests.

The cocktail list is still a work in progress, I'm told -- and, at least to my mind, it still has a ways to go.  Since I found the current iteration of the Cosme cocktail list a little disappointing as well, I wonder if there has been a change in staffing at the head of the beverage department.  The mezcal list, though, is impressive, its only flaw an overreliance on the same producers (mezcal ranges are so broad that this in no way limits choice, though).

I started with a nopal salad, the plump cactus fronds in a tangy vinaigrette with, if I remember right, a lot of cilantro.

Then farro-and-egg meatballs.  I really have no idea if these were meatless "meatballs" or if there was some unidentified meat mixed in.  It really doesn't matter, because the star of the dish was the mole in which they reposed -- not as deep, perhaps, as the (different) mole I had at Cosme last week, and certainly not as deep as the legendary (different still) mole at Pujol, but eons better than anything you'd expect at a corner tacqueria.

Then, chicharrones in a salsa verde, the skins (are they pork or chicken?  do I know?)  soft, unctuous (I haven't used that word in a long time, so I'm allowed), the sauce tangy (actually the word "tangy" can be thrown around freely here).

Robert Sietsema said he preferred Atla to Cosme.  That strikes me as insane.  But this is a very good place, for what it is.  Still, I have to say that for, say, post-LPR dining, I find Pig Bleecker a bit more compelling.

Speaking of post-LPR dining, my biggest complaint is that this place closes at an early 10 PM.  I understand that they open in the morning for breakfast, but a tacos-and-mezcal place should stay open at least till midnight.  Walking in at around 9:15 PM on a Wednesday, I was shocked to find a lot of availability, both at tables and at my preferred spot at the bar.  You'd think that a new, cheaper sibling from the chefs behind an SP top-50 would be slammed from the outset.

Walking in at around 9:15 PM on a Wednesday, I was shocked to find a lot of availability, both at tables and at my preferred spot at the bar.

Actually, now that I think of it, it was 9:15 PM on a Tuesday. And a Seder night, at that. A friend walked by the next night (actual Wednesday) and told me the place was, to use her word, "bumping".

I may be doing Atla a disservice by calling it a taco place. Maybe more antojitos?

I may be doing Atla a disservice by calling it a taco place. Maybe more antojitos?

That was my great grandmother.

The two Robs give Atla 4 stars.

Madame cheapo here...but after reading the props that this was a casual neighborhood breakfast spot a few months back,I popped in. A tiny shrimp taco and a horchata to drink came to 28 smackeroos with tip. tasty, and nice friendly service, but if this is the new norm,I am back to home cookin'.

A couple of meals here, and I'll still go back. I like the food (that fresh cactus salad is great), the use of acid, the service.  And I liked these: 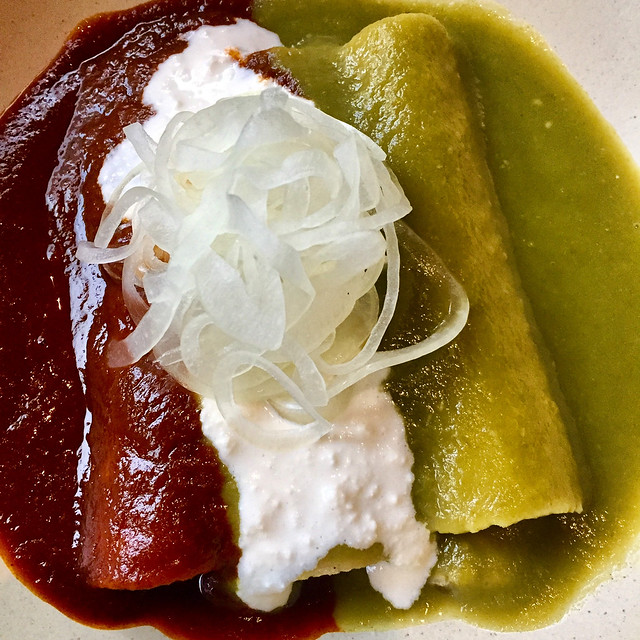 The sauces are wonderful, the enchiladas themselves pretty damn good too.

Not surprisingly, the pambazo is really, really good.

I'm still haunted by the idea that I think Claro is better, though.

(Oh, I see I had that the very first time I went.  I'm so predictable.)

Thanks for this nudge.   Several guys sell nopalites at our Sunday flea.   They sell tons of them, despining them on the spot with a razor sharp knife.

Still, I have to say that for, say, post-LPR dining, I find Pig Bleecker a bit more compelling.

FWIW, I have to say that, a few months in, I still feel the same way.

MF Old
Back to New York