11 replies to this topic

We often go to Rockaway Beach.  While driving on Cross Bay Blvd, I pass New Park Pizza, I pass Lenny's Clam Bar, I pass Matteo's all with in blocks of each other.. In fact, I have used New Park as sort of a measure for how close we are to the beach.  And though I have often toyed with the idea of stopping at these places, the appeal of the beach over pizza, or the draw of Don Peppe's was always too strong to stray.  Not to mention, i really like Whit's End.

Recently, I checked a few places of my wish list.. Lenny's being one of them.. In addition to just passing it for years, there a few guys I know who have been to Lenny's.  These men are more known for one thing or the other to me but, I never really considered their taste in food.

Anyway, we arrive around noon yesterday.. The place is relatively empty.. There is a strong looking dude with some old faded tattoos on his muscular arms.. He is wearing a blue tank top, nylon shorts and has tight freshly trimmed hair.. He is very tan.. He looks like he could rip a phone book in half.  He is with his wife who looks like Ginny Sack.. They are splitting their seafood fra diavolo over linguini for two.   It's in a huge oval dish.. mussels, conch, shrimp can be seen...   Not realizing this was a dish for two, I became immediately nervous this was their standard pasta size..

We ordered a bottle of the house Pinot Grigio for 19.95.. It's not sweet and actually not offensive...

If you read the back of the menu, it tells the story of the original owner.. His son in his 50's or 60's is in the dining room.. He walks over to every table and says hello and introduces himself.. Very sweet.. If you ask for Joe, his father's name, it's house policy to give you a glass of wine.. Also very sweet..

We order the clams and the seafood salad:

The seafood salad consists of two shrimp,a little celery,  conch and squid.. It's fresh, rather tasteless.. It's kind of boring, it needs a lot of lemon.. Again, excellent quality, just not too exciting..  It could use a little fixing up.. 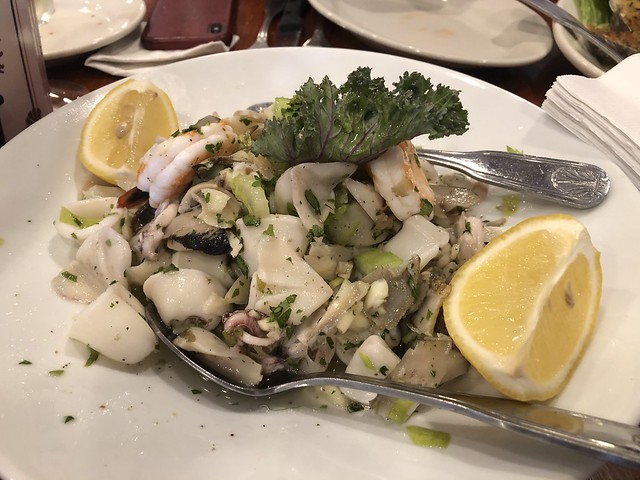 The clams are interesting as they offer you two kinds to choose from.. Little Neck, Top Neck... We tried both.. The filling is heavy, there is a clam in there but, it's very clam cake like... Needs lemon, sauce and even then, it was a little dry.. Good no doubt, no doubting the quality.. 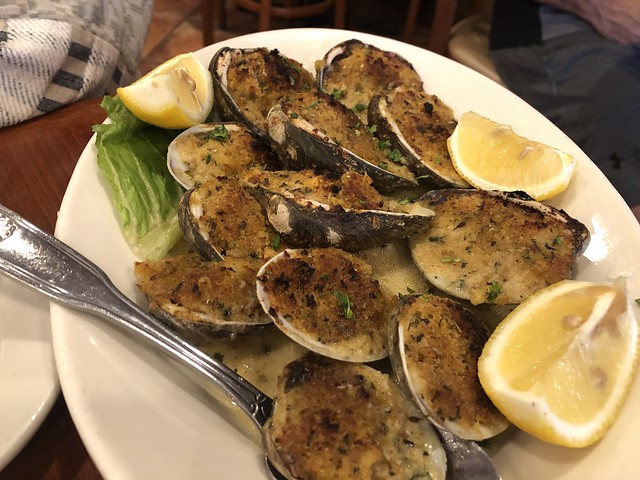 Jax's pasta came out:  His pasta was cooked more than I prefer.. It was too soft.

He ate, he was happy, he is always happy.. 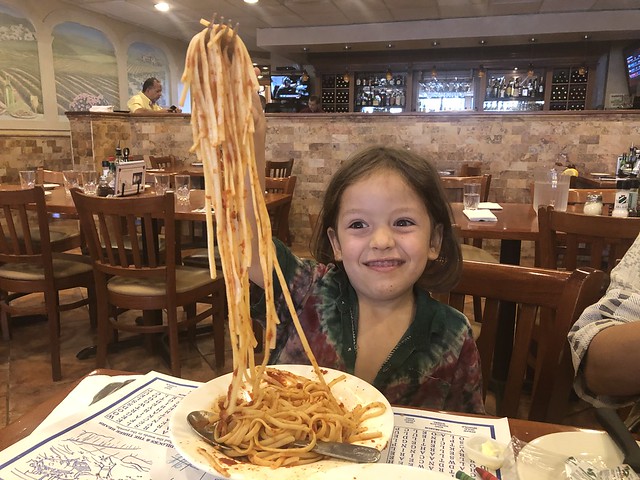 eggplant parm:  This was the best thing.. 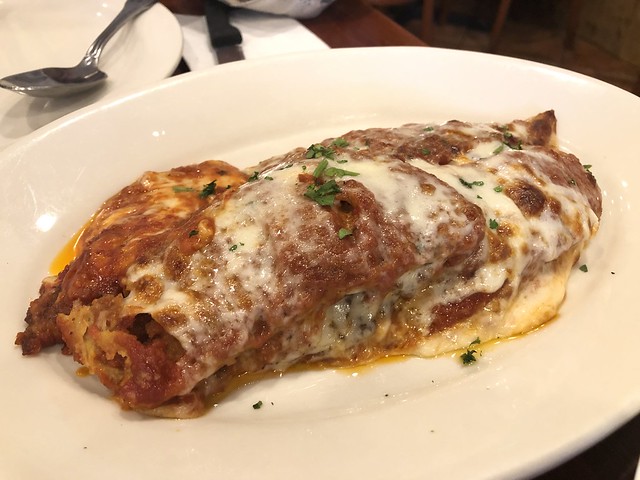 side of llinguini with clams.. The broth was delicious, the garlic roasted, the clams delicious.. Again, same thing with my pasta.. it was not al dente, it was soft.. i am sure if you are a regular you could request it how you like it.. this would have been really good.,

It has to be with the they hold, or how they want to serve the pasta.. it was consistent. 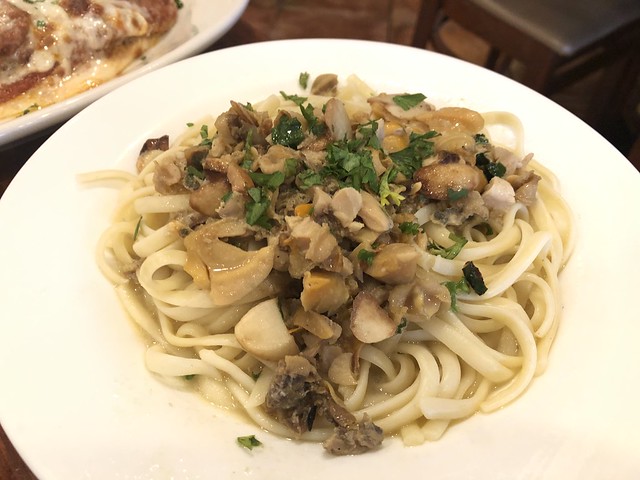 We had the homemade tiramisu.  I liked the lady finger border.. the cream had a lot of confectioners sugar.. it was really sweet but, it was homemade and not the generic Bindi Desserts you often see at these places.. Though, they do offer some Bindi things but, this was homemade as is their cheesecake.   But yeh, it was good..

Waitress was so sweet. 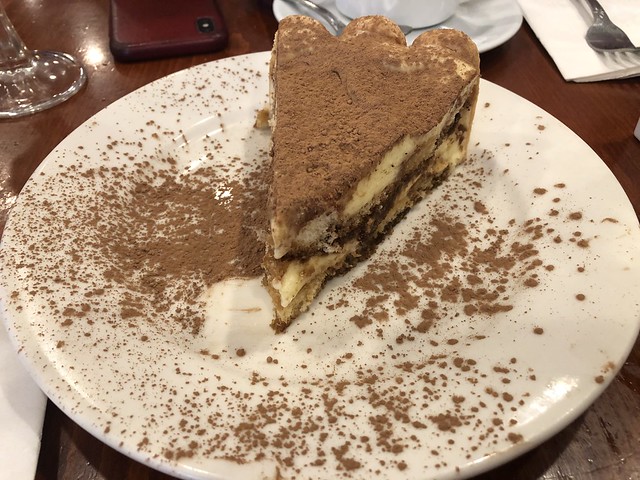 I don't know how to judge the place.. we went on a slow weekend, i would make sure that the pasta is al dente.. the seafood was definitely fresh and prepared well, you just have to douse the stuff in lemon. Jax's tomato sauce tasted good.. I would get mussels in tomato sauce next time.  also they seem to have ribs as a specialty as well.. Worth a shot, cheap wine, friendly staff.. I don't see rushing back any time soon

First time I went to Lenny's was 1959 with my parents. Think the name was slightly different then, but can't recall.

there are a lot of commercials on youtube... there use to be several locations, one in Brooklyn Heights.

I think that's me in the commercial sitting at the table.

A totally ok slice for sure.  I have recently heard some pizza folk give it high praise.. It's aight.   I really want to try Matteo's.

A totally ok slice for sure.  I have recently heard some pizza folk give it high praise.. It's aight.   I really want to try Matteo's.

Needs to be "well done!"

...there use to be several locations, one in Brooklyn Heights.


Ginny & I ate there quite a few times, including when we were just getting to know each other. One dinner, after some moments of silence (I was thinking how much I liked her), I was stupid enough to ask what she was thinking. “I was just wondering where Johnny Mathis lives” was her response. Thirty four years later, I guess that was good enough for me.

Has she ever found out?