I've been meaning to try ugly baby on smith. it's the guy who had khao soi in redhook, the menu says one dish is brutally spicy.

I havent been yet, but plan to go when we return from Italy. Just want to clarify that this isn't the guy who was dumped by the owner of Khao Soi in Red Hook. This is her cooking partner, who worked with her in the kitchen. She's a co-owner of Ugly Baby but doesn't live in NYC longer, so this guy is the co-owner/chef.

Sounds like something you get after getting bit by a dog.

And you're probably gonna like where it is, too...

The Post reports that the to-be-named project from the former Acme chef will likely open by spring, taking over 4,000-square-feet of space for a restaurant that seats 40 people in a dining room and 40 people at a bar.

I'm not gonna like it when the L train closes.

There's a bonfire in my restaurant — the way the caveman was cooking. And the other one is ice. One part of the kitchen is a big huge iceberg, where we have tons of raw things. Everything is clean with natural flavors. This is the future of dining — be more simple, and don't pollute the food. It's not really a restaurant. It's more like a kitchen. A kitchen with a restaurant inside of it.

Depends on what the definition of "is" is.

The first, smaller Pok Pok Ny space (most recently Pok Pok Phat Thai) is now a place called Popina. Owners worked at Maialino. It's Italian and Southern, with reasonable prices, and sounds like it has a very good wine list. Of course, Carla Hall couldn't hack it out here. But it might be enough to get me to cross the BQE.

I know where I'll be going in February. 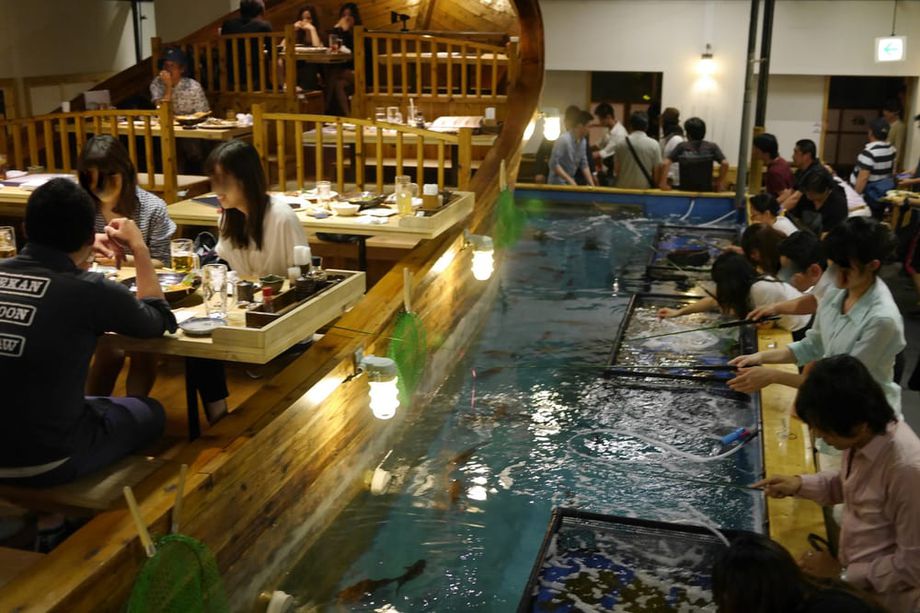 One of Japan’s more outrageous restaurant concepts — where diners literally fish for their dinner inside the restaurant — is set to hit Chelsea this February. Zauo, under construction now at 152 West 24th Street, is shaping up to be quite the unique addition to the New York City dining scene: An actual boat is currently being built inside the restaurant in which diners will be able to reel in fish from a tank stocked with ten different kinds of fish.
...
In Japan, diners start by grabbing poles and purchasing bait before they “target the prey,” reads the website, though diners having a rough time can ask servers for advice. Once a diner has caught a fish, it’s turned over to staff, which takes it to be grilled, tempura-fried, or served as sushi.

"once the penis came out, there was discussions as to why we didn't order the testicles" - Daniel describing a meal in China

I ate in a sushi restaurant in Vancouver, BC, with seating like that, but I don't think it was over a fish tank.

If you do try it (although I suspect you are being ironic), thanks in advance for taking one for the team.

Are the worms included?

And yes Susanne, I was being ironic.  I wouldn't be caught dead in a place like that.  Even when I was 25.

"once the penis came out, there was discussions as to why we didn't order the testicles" - Daniel describing a meal in China
Back to New York