what beers are you drinking?

other half all riwaka everything imperial india pale ale - 8.5% abv. riwaka hops are rare hops that are grown in both of the former colonies that were the first to see the sun that never set. I can only remember one other beer that uses them, hill farmstead’s superlative susan, but this tastes as strongly of the southern hemisphere as nelson or any of the bad wine those places produce. this is hard to describe, and I don’t think the grapefruit and passion fruit descriptors google will pull up are that helpful. this tastes like the non bitter part of passion fruit, along with the common thread I get in lychee, rambutan, jackfruit, papaya, and our hemisphere’s paw paw. I don’t know if that’s an adequate descriptor or not, but this is another beer that’s all juice and there’s no real malt or alcohol presence. I like this more than their other single hopped beers with the same abv, which often combine these flavors with citrus and stone fruit. I really like this, and hope that I’ll come across the hill harmstead beers made with these hops soon etc etc. strongly recommended.

eta: I guess there is some citrus here.

mikkeller freddie murkury new england style imperial india pale ale - 9.2% abv. this isn’t anywhere near as distinctive as last night’s beer, which is what you’d expect from something made with simcoe and mosaic, but it’s got tons of the papaya, passion fruit, and citrus I like so much, and the lactose gives it a nice mouthfeel and enough sweetness that the fruit tastes extra rich in a way that reminds me of the old school west coast triples. this is well made and very drinkable for the abv, but it’s hard to see the ingenuity that you often get in the de proef made mikkeller beer.

I got some paw-paw at the Greenmarket a couple of weeks ago.  It was cheap (don't tell Liquid).  I enjoyed it.

short throw brewing can control india pale ale - 6.5% abv. there’s a few interesting thing about this one. it’s the initial release from brandon tolbert, formerly of richmond va’s the answer brewing, under the short throw name, which is a new 12% llc brand, and one of the first releases from a new brewery they opened in north haven, ct. that has already released beer from omnipollo, evil twin, and some of the other new 12% brands I haven’t tried yet. the answer had a very good reputation, and the small amount of things I had on tap (at torst, gold star, and OH) were pretty good, so in some ways it’s exciting to have access to his beer, but at the same time it’s one of the many brands in the same facility that can make beer like this, and I’m too tired to try to count the number of local breweries that can make a decent neipa at this point, but it’s probably close to fifteen at this point. the fact that the two initial releases, a citra single and a mosaic double, are more or less the same as the two great notion beers that showed up last weekend really reinforces the point that so much of this stuff is really similar. those great notion beers were exciting because they were actually clearly better than most of the similar ones, but this is solid without being distinctive in any real way. it’s toward the citrus end of the familiar citra flavor spectrum, with some tangerine and orange in the finish, along with some mango and a tiny bit of resin. this is definitely a well made example of it’s kind, and I guess I shouldn’t really use it to try to make some larger point about the insane over saturation of the nyc beer market blah blah blah. good mouthfeel and packaging.

We have a couple of Great Notion cans.. We have the So Wrong It's Ripe, Ripe and a DIPA.. I can say, these have been my favorite IPA's I have drank in recent memory.. I guess they are now distributing here?  Anyway, if you haven't tried them, find them.

worth putting on the wall: 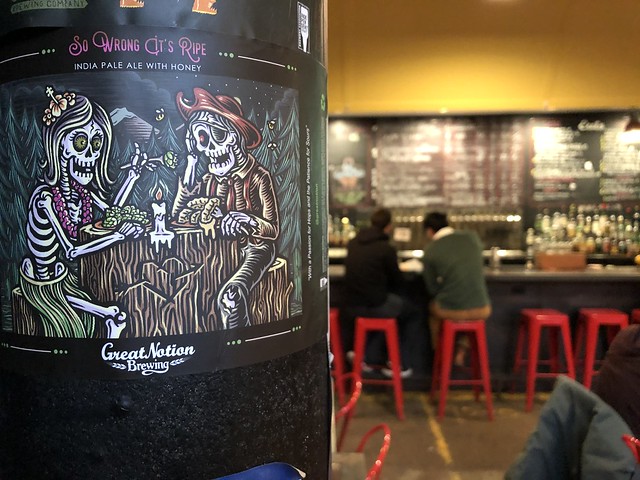 short throw brewing the product double india pale ale - brewed and packaged by short throw brewing, north haven, ct, 8% abv. see the post above daniel’s for a rant about this beers pedigree, which makes it disappointing on two fronts. the most obvious is that this beer isn’t any better than any of the local options. there’s a simple set of citrus and maybe peach flavors that are kind of bitter blah blah blah.

other half brewing contains daydream imperial oat cream india pale ale - 8% abv. this is the first release of this one, which has amarillo, cashmere, mosaic, and citra, as well as the cryo version of the last two, and despite the presence of mosaic this contains the hint of lactose that the word daydream suggests in oh parlance. this one is weird, there’s an odd mixture of the non bitter parts of peach and apricot that have enough apparent lactose that they remind me of the way the nasty yogurt fruit smoothies that my kids drink smell. this isn’t unpleasant, and it doesn’t taste like the usual oh beer, but the great is the enemy of the same breweries good and so on.

industrial arts brewing see translation northeast india pale ale 🍍🏝🍹 - 7% abv. those are pretty close to the actual emojis on the side of the can, which I copied because this was originally made for the japanese market and I can’t figure out how to copy the kanji. this one is a mixture of citra and strata hops, which are a newish hop from oregon. the commercial description of wafting cannabis, passion fruit, strawberry, and grapefruit seems more or less accurate, and I’d toss in some peach and lime. this has a pretty light body compared the to stuff I’m used to, and I like this a lot more than the last few new beers I’ve tried from IA.

off color brewing dino smores imperial marshmallow stout - 10.5% abv. this is the third or fourth year in a row that I’ve had this, and it’s usually one of those beers I put off drinking because I’ve had it before and ends up tasting great after all the increasingly unpalatable stouts I’m compelled to buy. I decided to do it the other way around this year, and I don’t know whether it’s because they changed the recipe or put it in cans or I changed or what but this isn’t at all the way I remember it. it’s a lot more bitter, the adjuncts aren’t there, and this is just a really bad beer, which is too bad because previous batches of this were a great reminder that this kind of beer isn’t as easy as it seems blah blah blah and blah.

bissel brothers brewing the nuclear whim with the fuse of a mile ale - 7.6% abv. bissel brothers is one of the original ne ipa purveyors, this was first made for their 4th anniversary, which makes this recipe about two years old. it uses a bunch of hops I’m not that familiar with - african queen and southern passion, as well as the ubiquitous citra. I’m confused by the presence of african hops, I’m pretty sure I read something that said that AB/InBev cornered the market and made them unavailable to anyone else.. anyways, this is pretty bitter for a ne ipa, and there’s a lot of weird fruit stuff that’s like the flavor I usual call peach along with some citrus and the weird bitterness that a lot of the early other half beers had. this is mildly disappointing given how much I liked their flagship ipa substance last time I had it, but it’s still above the average of the local stuff I drink.

mikkeller sd beer geek vanilla shake imperial stout with coffee & vanilla - 12% abv. this is a sweet, boozy imperial stout that’s surprisingly easy to drink despite its inherent flaws. the basic milk chocolate, roasted coffee, and vanilla flavors are all really well done, and it had the smoothness that well done lactose beers have without directly tasting like lactose etc etc. this is a really enjoyable beer, which is only surprisingly when you compare it to the newer pasty stouts that have managed to completely redefine cloying blah blah blah.

westbrook siberian black magic panther imperial stout - 12% abv. this is the rare stout that wasn’t made using adjuncts or barrels that previously held other kinds of alcohol, which is why I bought this, but while it hides it’s high abv well the roasted malt and anise flavors are pretty subtle for a beer of this size, and there’s some interesting blackberry and chocolate stuff in the finish, and it has the light body that all the good stouts made at westbrook have. this is an enjoyable beer, but you can almost see why they think you need to add things to it...

other half x monkish x cellarmaker x silicon valley conjoined triangles of success triple india pale ale - 10% abv. this is a collaboration between OH, two breweries from california, and an HBO show. each brewery released their own version of it with its own hop bill. this one has three kinds of citra (cryo and incognito along with plain) as well as cashmere, galaxy, and motueka, which seems a lot like the typical other half hop bill. I have no idea how much the other names on the fan were involved in this, but it doesn’t seem like one of the ipa collabs that are less than the sum of its parts. there’s an enormous set of citra flavors (mostly orange sherbet, with some mango, papaya, and maybe underripe peach) and enough weird bitter grassy flavors to keep it from being too sweet. OH has got so much better at these big triple ipas over the last few years, blah blah blah. recommended.

Gave up beer for a few weeks but dove back in yesterday. Kent Falls Glitter Rainbow was the highlight of the day. 6% IPA canned on February 3. No new territory as it is a juicy and hazy IPA but absolutely delicious. Very well balanced and obviously fresh. Beautiful color and great mouthfeel. I thankfully was smart enough to hide one of the cans......

finback aqua lung double india pale ale DIPA dry hopped with idaho gem, azalea, and mosaic. brewed in collaboration with hackney - brewed in glendale, 8.5% abv. this is a straight up the middle modern double ipa - there's a bunch of candied tropical fruit flavors, along with orange and maybe apricot that are followed by enough bitterness to keep it out of real ne ipa territory, although it's also a little too sweet for that. so this is exactly as big and fruity as you expect double ipa to be nowadays, blah blah blah bitterness blah blah.