The Rest of Us

May I ask whither the partridge?

I wonder if D’Artagnan has shad roe.

Pantry management of which I am extremely proud.

I had a bit of leftover partridge, but not enough to make up a portion.  It was sitting in the red wine/shallot sauce I made for it, along with the accompanying celery/root vegetable smash that I dumped in for leftover storage.  This began to look like the a ragu to me.  I also had some unfrozen frozen skinless heirloom tomatoes I had bought from Bradley's without a clear idea of what I'd do with them.  And a few more shallots that needed eating immediately.  And three garlic cloves that were in a similar state.

So I bought some mushrooms (porcinii and black trumpet), and ecco!  An instant "ragu" (although there was nothing very "instant" about the removal of the meat from the carcass).

Even if you don't subscribe to the "one clear choice" school of wine pairings, it has to be pretty evident that this called out for a Chianti.

One of the most traditionally made Chiantis you now can get, made using the old governo technique in which half-dried grapes are added to the must of fermenting grapes, raising the sugar level (although the wines can then be fermented dry, as this one is).  Also using the traditional Chianti blend, including white grapes (I thought you weren't allowed to call such wines "Chianti" any more).  So this is somewhat lighter (and less alcoholic!) than most Chiantis these days.  Which is fine with me!

Out of respect for this low-yield/high-quality vintage, I perhaps let this age a little more than such a light wine called for.  But no big harm.  The tart cherry fruit still just dances in the glass (with that sprinkiing of characteristic Chianti dust), and then the biting tingling finish of the appellation takes it home.

I'm very proud of this meal.

And now there's some of this "ragu" left over.

Cooking:  the gift that keeps on giving.

I am attempting to use up my (D'artagnan) freezer stuff, because I want to buy new stuff to stick in there. I still have like 6 quail (the 8 oz. french ones), a couple of hunks of veal tenderloin,  a whole chicken, lots of merguez, etc. etc.

But tonight I'm making a tied, boned, pork shoulder roast that I found in the bottom of said freezer, from Rising Sun Farms, which means I must've bought it last summer/fall at the farmer's market. Oy.

Has joe posted in a few days?

(I should be the last person to ask that.   I'm not gonna tell you how old the brats I'm having for dinner tomorrow are.)

After a weekend's stay in my refrigerator -- and with (I'm convinced it really helped) the addition of some more tomato upon reheating -- my partridge "ragu" has up and gone to heaven.  You'd be happy to be served this (it was over pappardelle again) anywhere.

Very lightly sautéed chrysanthemum greens on the side.

You might think that you'd want something more rustic than this, the first drink-ready Chianti I could find in my storage units.  This is aged in barrique, and the only mixing grape is Cabernet Sauvignon.  But partridge is a pretty noble bird.

So this wine is smoooooth, kind of elegant.  Although it's fairly complex, it goes down easy.  No tang.

It's a good wine, nice to drink -- and, I have to say, it went pretty well with that ragu.  It's not what anyone (by which I mean "I") wants when they reach for a Chianti, though.

It does prove pretty conclusively that the Montenidoli I had with the first batch of this ragu was too light for it.

Is “pantry” conceptual? I remember pantries but I haven’t seen them in New York.

the only mixing grape is Cabernet Sauvignon.

I might be wrong. Research discloses their might be some Cabernet Franc -- another age-old Tuscan grape -- in there as well.

Is “pantry” conceptual? I remember pantries but I haven’t seen them in New York.

Mine is a little more than notional... 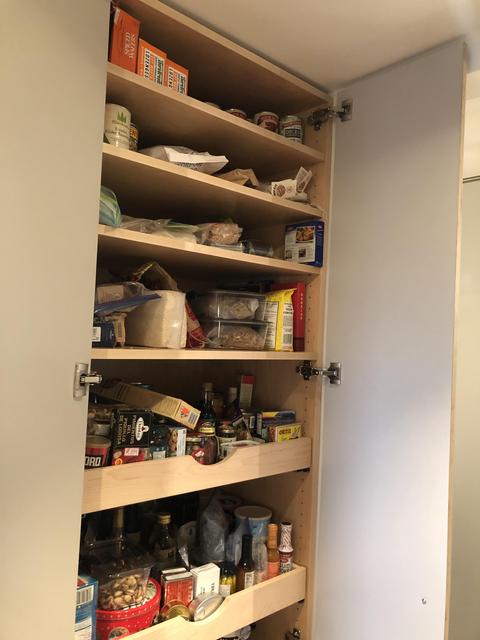 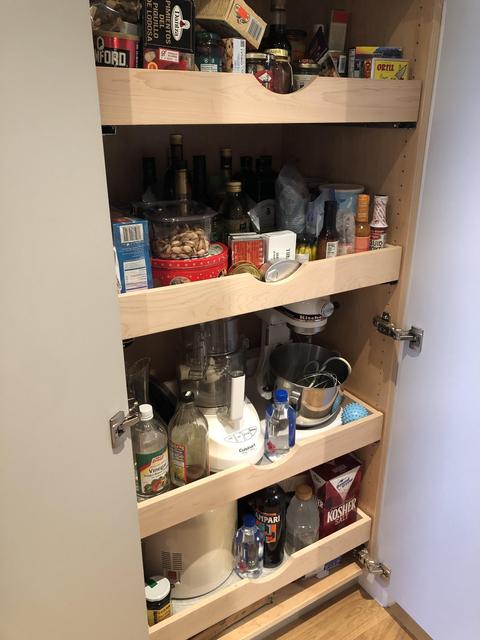 But yeah, if you mean a room that one walks into, that's a whole other ball of wax.

We actually have a minimally walk-in pantry.   When we moved in, it had a door which we removed.  When and where I grew up, houses had built in "coolers", a food closet with screened access to outdoors where you kept things that didn't need actual refrigeration, produce and condiments.

Ironically, we now keep excess package goods in the basement where we've found that we've been maintaining a community food bank.    We recently moved this stuff to a hopefully "mouseproof" cupboard.    Will report on its efficacy.

Back to Wines and liquor