65 replies to this topic

And people seem to like stubborn seed very much but hard for me to tell how serious it is.

Sardinia is Frank quality, for better or worse.

Tasquiza is a sweet place for a couple of tacos and a cocktail.

And if you're interested - panther coffee @ Purdy and True Loaf around the corner (the spinach turnover from true loaf is best of genre for sure), and also Rosetta (on Collins and 8th) for Italian focaccias and things (not best of genre but surprising)

My gym in SoBe was the Crunch on Washington ... so after working out just prior to lunch time, I would often traipse over to Taquiza to tackle a trio of tacos and they were pretty decent ... or I'd hop on my trusty Vespa and scoot down 10 blocks to the window at My Ceviche for their combination ceviche and a few tacos (shrimp, octopus, tuna). The ceviche is relatively decent but the tacos are pretty lame ... or I'd head yet another couple blocks south to Joe's Take Away (although they have plenty of tables and a bar too) for something like a grilled grouper sandwich or overpriced stone crabs.

And then when returning to the Venetian Islands, of course there would be a quick pitstop for a cold brew at Panther on Purdy ... but the Panther in Wynwood is way cooler. And Wynwood must be checked out and just about the only real chef in Wynwood (or SoBe, for that matter) is Kilgore at Alter, which has a bit too much modernist stuff (and textures) going on for my taste, but is still probably worth going nonetheless ... and I always do. That said, although I haven't been in SoBe for over a year, I am constantly receiving emails for some new place that Kilgore is supposedly associated with - Kaido Miami. And that's not a good sign because chefs aren't in multiple places at the same time and what made Alter interesting is that Kilgore was pretty much always in house.

I've been to Pao in the Faena on a number of occasions and the food has never been especially good in any absolute sense. Fun place though. mitchells's food and service experience is a total outlier IMHO, but a good outlier.

Re NAOE, yeah he does a good job food-wise but was the pace of the meal HORRENDOUSLY slow. Went once and never went back because of that and because it just didn't seem to be an aberration. That said, the resto has moved since I went and maybe things have changed ie someone other than just Kevin in the kitchen.

I feel like if he'd have a charcoal grill it'd make a huge difference, but what an honest effort.

And a whole page of natural stuff.

Good going overall. Some tech issues and yes too much modernist nonsense but good.

I was surprised by that because below is the wine list from March 2017 ... (I remember the strangest things ...)

Looks like NYers weren't willing to pay north of 4 for it ... things go up and things go down, I guess

I'll note for the record that I find all these prices to be OUTRAGEOUS, 274 included ... 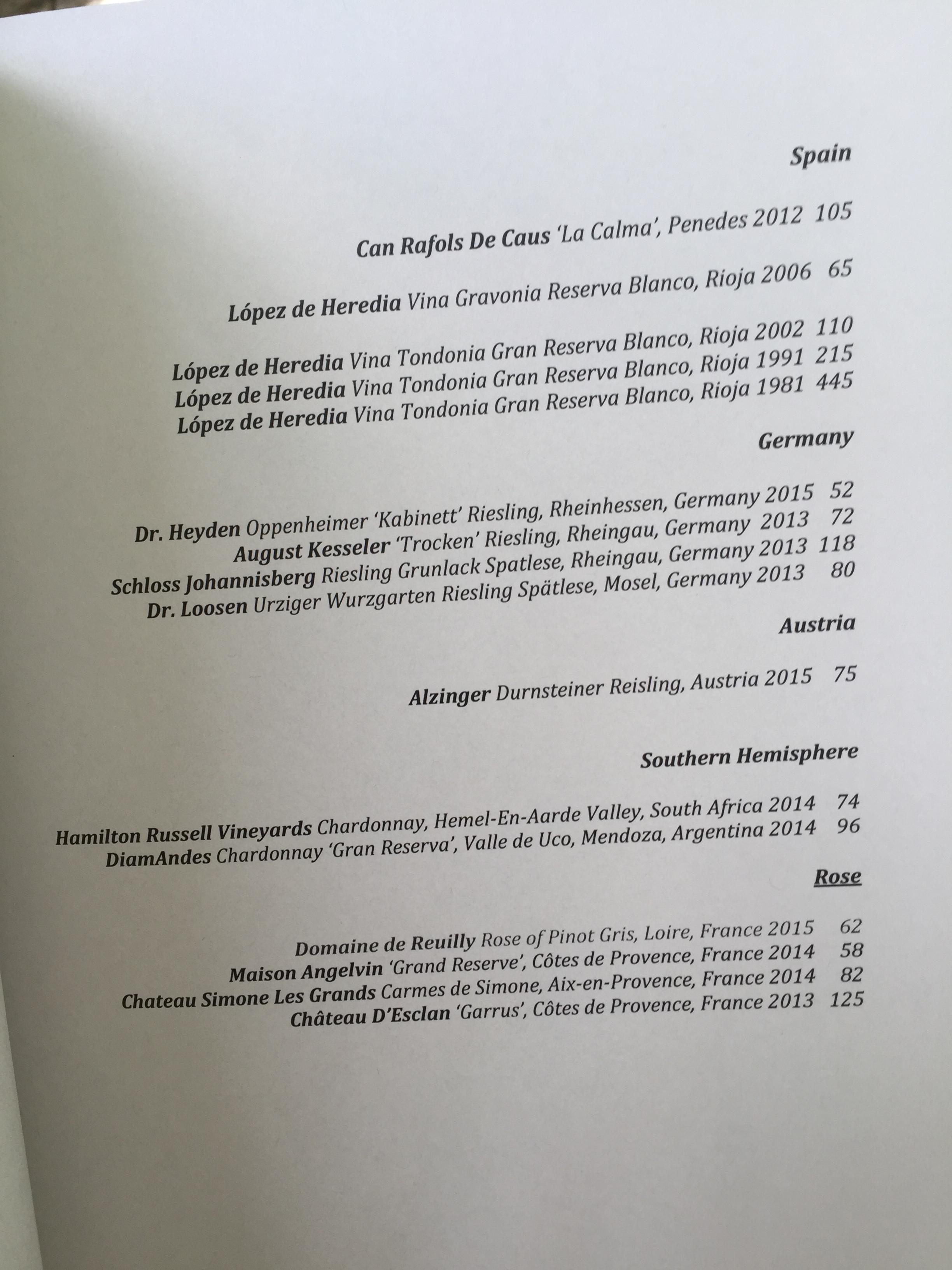 You can buy a case from them, resell it in nyc and use the spread to buy two cases in Spain!

Many other good prices (e.g. I noticed the Tschida NT Gruner for $125 or so, compared to US retail around $85)

I'll note that the first wine on that list is a pretty nice wine ... the 2012 La Calma ... over-priced though, so less pleasant, but that's why most sane people don't live in NYC :-)

Last October in Madrid I had the 2013 La Calma at Umiko (good, cool, creative sushi place, Chambo likes) and the 2012 La Calma at A Barra (tres bourgeois fine dining place, it fits a need, I guess, maybe for an upscale biz dinner, but Chambo ain't loving the joint).

You ever do BYOP ?

In fact, I'm doing it tonight ... what's BYOP, you ask ? well obviously it's BYOPercebes and I have some amazing ones. Yep, Chambo is pretty wired in Galicia to the point that chefs let him bring percebes if they aren't on their menu. I make sure the situation is appropriately handled, of course

Hint as to resto - a new place ... chef was former chef de cuisine at Casa Marcelo back when Casa M was still a gastro (I ate there then) ... chef helped turn Casa M into its current Momofuku clone-ish state ... chef opened Arallo in Coruna (went for lunch within 2 months of open) while he was head chef at Alborada* (went to dinner there the same day as that lunch at Arallo and see chef again and ask "WTF ! Are you running every resto in this city !!!"). While he was in charge, Alborada effectively became an imposed tasting menu place ... that location sucked but it was actually a pretty good meal food-wise under his reign.

* which is now PERM CLOSED

Life is good in A Coruna ... you should consider moving ...

Anyone have restaurant recommendations for Miami Beach, or within 20 minutes drive?

Not Italian, and probably not a local outlet for Boulud-Vongerichten-Keller.  La Petite Maison looks pleasant.  Oh, I see that's actually part of a chain. ETA: And the prices look stupid, so back to square one.

For you, go to Alter in Wynwood if you want to eat food from an actual chef ... just go there and I'd request a table ... you eat at the real resto inside ... not whatever nonsense that they're doing in that bar area in the back ... and the inside counter doesn't look super comfortable to me, skip it if offered ... unless of course they insist and then beggars can't be ... Alter is the only place in the entire area that's really food focused IMHO, sushi aside

But it just so much depends on what you want ... real food ... or the Miami scene / fun

I don't really think that Pao is your cup of tea but checking out the Faena is totally cool ... maybe even during the day ... I've had cheapo lunches at Los Fuegos that were pretty darn good for their price point a few years ago but it's probably a M-F thing ... that's Mon-Fri

If you insist on staying "on the Beach", as we say, and more specifically South Beach, it's not clear where one would really want to go. In the south, there's (kinda noisy) Upland which has a bar area up front. The Milos, also in SoFi (South of Fifth, and yes, SoFi is a real name) is a pretty nice space ... and they do a very good cheapo lunch (a reasonable biz lunch option, in fact) that I've been to many times ... but if one is going to be a super fish snob then you're going to have to pay big bucks (for sketchy execution ... and the non-fish components don't warrant big bucks ... so stick to the cheapo lunch if you care about value) ... which may be perfectly fine ... it's "vacation / expense account money" so it doesn't really count

I'm assuming that you're NOT trying to sneak in a little model action on the side ... am I right ? If I am, then no need for any of the Primes or Red the Steakhouse or Smith & Wollensky or Fogo or Il Mulino  etc etc etc cuz through my eyes, they're all mainly about the wild fish in the sea even if they are pretty meat-focused*

And of course you know about Joe's which is totally up your historical resto alley ... where you can chomp down on expensive stone crabs at a large, comfortable bar seating area ... but other than over-priced stone crabs and the history and the room, phewwww ... how can I say it nicely ... hmmm let's just say it's not a Galician's favorite ... and I never go there cuz when in town, if i want stone crabs we'll order 5 or 10 pounds from a company that delivers and their stuff is top quality ... and we'll have a little pool party

I don't have time to take you further north right now ... I'm preparing to pow-pow with a concierge ...

Yes I like Joe’s; I’ve been down here a bunch of times but not in maybe three or four years. Or more. I get too much model action in New York, so this is useful.

ETA: I hate “fun.” Or as Old John McSorley said when he stopped drinking, “I’ve had my share.”

Back to Florida and The South