30 replies to this topic

Wow, this place is great.. This is one of the more exciting and enjoyable meals I have had (outside of China) in a long time.. In fact, I can't think of another restaurant in Brooklyn that I would rather go to.  I would go back for lunch today and eat some of those things I had last night again.

We started with the Cacio e pepe fritlle which essentially was a beautiful gougeres covered in a beautiful pecorino.  They were perfectly made and the cheese was just so delicious.. 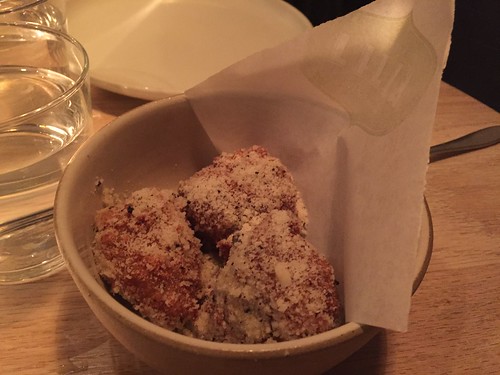 Next up, this dish was outrageous, the bagna cauda.. what seemed to be a half share of a CSA was served with grilled bread and a delicious, anchovy filled warm bagna cauda kept heated over a candle..  The vegetables were delicious.. There was radicchio, baby potatoes, romesco, snap peas and radishes perfectly cooked and or subtly seasoned.. Some of them were a tad spicy with finely crushed pepper, other had a slight hint of lemon..  In fact, there seems to be some type of chile pepper in all of the dishes.. Whether it's flakes or flecks or ground, there a nice balanced heat..  It was just beautifully done.. Precious in a good way, i would say.. This is just fantastic. 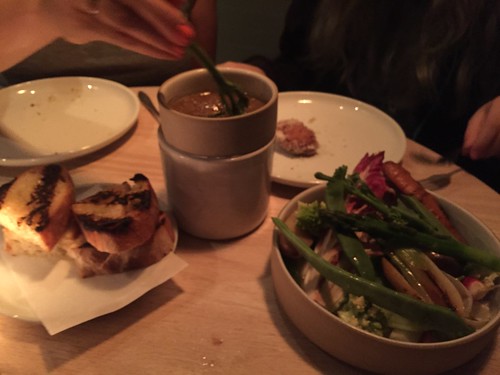 blow fish tails are just ok.. There is a monkfish quality to blow fish that just makes it a boring fish. They were cooked ok and the sauce was had a nice acid to it but, at the end of the day, it's just not an exciting fish. 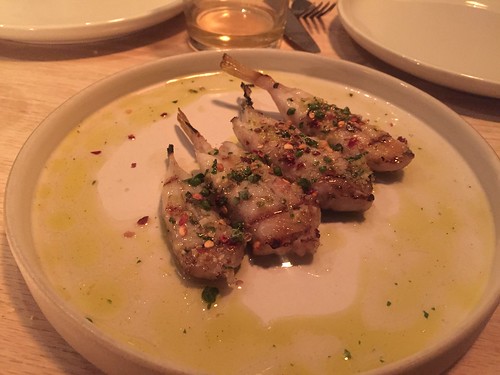 The clams are a stop everything and run to get this dish..  Pickled Calabrian chile peppers with butter and super fine toasted bread crumbs.. And the portion was large ta boot..  Really great. 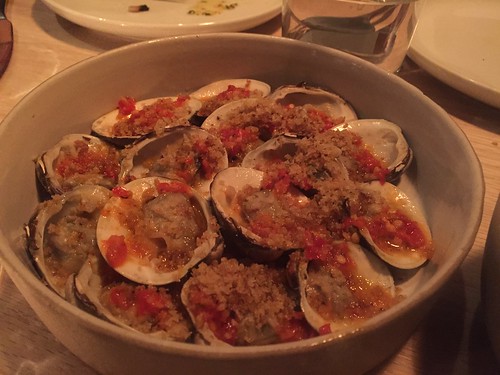 agnolotti with honey:  a beautiful plate of pasta. 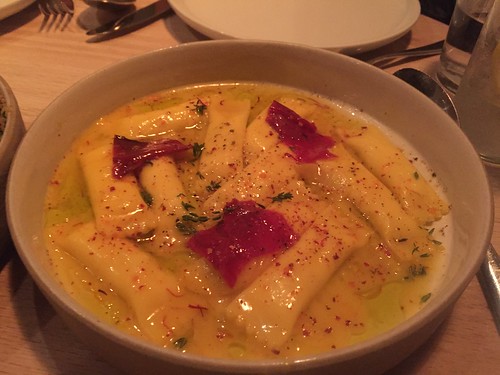 Little gem salad:  this was shockingly good.. It was a grown up version of the typical salad you would get at Italian American restaurant.. Except the vinegar was a strong and acidic. the oregano fresh and bright and there was no pile of water at the bottom of the bowl.. Same tiny crunch bread crumbs from the clams.  Love this salad. 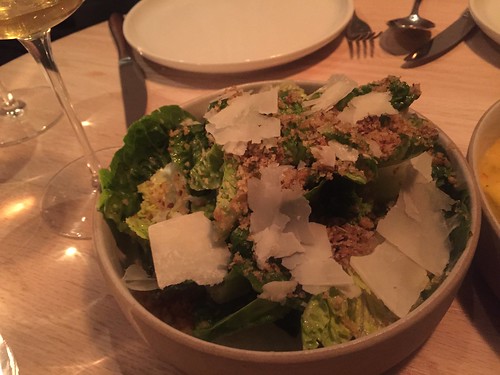 The last dish, which was a shame to end on was the Ricotta Gnocchi.. This was the only misstep of the entire night.. And it happened on two levels. We arrived last night as the kitchen was closing.. So, we placed our entire ordered at once.. After all the food was served our waitress asked us if we would like coffee or dessert. I asked about the Gnocchi.. She said hold on one moment and went back to the kitchen.. When she came back I said, we don't really need the dish.. I even kind of said, we would prefer not to have it as we were full.. She was graciously adamant.   Now, we all know that the kitchen closes at 11 and it was well passed that time.  So, the dish arrives and the gnocchi is rather hard..  I had heard it be described as pillowy and light.. this was anything but.. IT was sad, it was dense and gummy.   The whole dish just didn't feel right.  Not on par with any of the other dishes we had and it makes me feel like it was slapped together. if i can say one thing, the flavors were there, the pistachios were delicious. 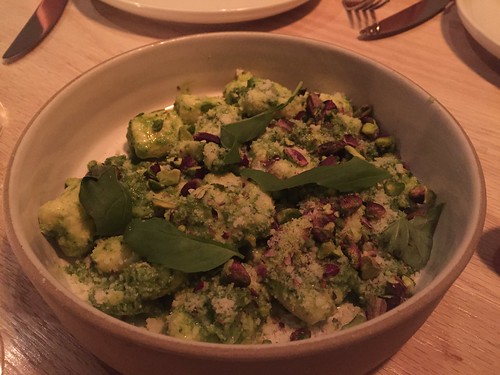 this place is a gem, the space is beautiful, staff is professional.. This is maybe the most grown up restaurant in Brooklyn.

we have a thread on this place already I think.

i know it was discussed when wells wrote it up but, that was all i found.

I'll merge threads if someone posts a link, google just has orik's mention of it in the rebelle thread.

I'll merge threads if someone posts a link, google just has orik's mention of it in the rebelle thread.

Also, he said it sucked in the Pete Wells thread..

I must have ordered wrong.

I thought my dinner -- which had no dishes at all in common with Daniel's -- was perfectly good, fine, worth a revisit -- but not at all special.  In fact, I was thinking this is another case where Missy Robbins cooked about the same food in much less fashionable (and appealing) rooms in much less cool locations at A Voce,* and nobody got really excited.  But now that she's in a (really cool) converted garage in Williamsburg, it's like a universal must-visit.

I started with the roasted trumpet mushrooms heavily brushed with balsamic vinegar.  They were fine.

I then had the spaghetti with spring garlic and lemon.  It was fine.

I then had the veal shank.  It was WAY oversalted.  This dish has been highly praised elsewhere, so I take this as a one-off misstep.  Chef Robbins wasn't there the night I was.  I hope it doesn't make a difference.

Don't get me wrong.  I love pasta-centric rustic Italian as much as the next guy.  I liked this place and fully intend to return (especially now that Daniel has made what he had sound so good).  But I didn't feel the earth move.

whenever we bbq clams, I copy this place in Guilford Ct called, "The Place"  if anyone is ever driving up to New England, it's a fun spot to check out.. http://theplaceguilford.com/

They do grilled clams with cocktail sauce and butter..  I will now add Calabrian Chiles and butter to my BBQ Clam combo.. Almost as good as say, a Sambal Butter but, not quite

Somehow for all the time I've spent there, I've never managed to make it to the town center...

Probably because I'm only ever there to work 14+ hour days.


I didn't tip at Per Se either.

You know what's quite as good as Sambal butter?  NOTHING.

The place is almost worth a drive for lunch from NYC.. It's bring your own anything (we have made margaritas there) , you hang out in a backyard, sit around a fire and can eat lobster and clams for many hours... Only problem, designated driver..

The Place is really fun....they have steamers too.

This place just romped home as Eater readers' restaurant of the year: twice the votes of Le Coucou.


Doubling down on the elitism
I like the look.