19 replies to this topic

Faun is a new restaurant in the space last occupied by R&D 606 on Vanderbilt Ave. in Prospect Heights, Brooklyn.

The place bills itself as Italian, but it's only nominally Italian.  What it really is, is Brooklyn "new American" masquerading as Italian.  So there's a three-course dinner former, with antipasti, primi, and secondi, and the primi are all pasta -- but there isn't a traditional Italian dish on the menu.  It's all market-driven new American, in an Italian format.

So my antipasto was watermelon, vacuum-treated in some way to intensify the flavor (which worked), with a very heavy dusting of ricotta salata and some oregano an pumpkin seeds.  You might say that the cheese and the oregano were Italian elements.  But you also might say, accurately, that the chef made up this dish to showcase what's at the greenmarket.  None the worse for that:  it was very good (and very refreshing on one of the least comfortable days I can remember).

Similarly, my secondo was squab with gooseberries.  I don't ever remember seeing gooseberries used in Italy (everybody knows they're a part of Yorkshire cuisine).  To be frank, I ordered this dish mainly to see how a competent chef handles an ingredient I'm enamored of but am always afraid I misuse.  Here, the gooseberries were cooked whole, served alongside the squab with some sweet potatoes, adding a mild tang to a side section that otherwise risked blandness.  The squab itself was almost perfect:  good for this kitchen.

The pasta was perhaps the giveaway as to what they're doing here.  Billed as quadrucci (pasta sheets) with tomatoes and stracciatella, it wasn't at all what you'd have expected.  Rather, the tomatoes were little sungolds (I assume), served whole slightly cooked, in a bath of brown butter, the cheese beside them.  A much more new American than Italian dish.  But lovely and delicious.  And just perfect for a too-hot summer's evening.

When I went to The Finch a couple of days before, I wondered what happened to the bartender I had spent my dinner with a few days after opening.  He's running the beverage program here.  The cocktail list is exceptionally appealing.  The wine program is a good start -- although it needs to expand.  The very reasonably priced by-the-glass list (this is getting to be a welcome Vanderbilt Ave. trend) places an odd emphasis on Greek wines -- but they're good Greek wines.  Beyond that, it's telling (in terms of the restaurant's intentions in regard to cuisine) that the list trends French rather than Italian.  Good, interesting stuff, though.

Faun may or may not be a destination restaurant.  It's certainly worth a visit, though, by visitors who are unable to get into Olmsted down the street.  While Mitchell's Soul Food will always reign supreme (as long as its owners choose to keep it open), it's odd to see my street turning into a real restaurant row.

ETA -- COMP DISCLOSURE:  The bartender correctly intuited that my favorite amaro is dell'Erborista, and gave me a glass.

Also, Joe will want to know that the hostess complimented my outfit -- particularly my hat and shirt -- on my way out.

You'll have to go several times & report back that you continue to like it before I'll venture forth.  The chef was at Vinegar Hill during a stint where I found the food uneven (the place I liked even less & haven't gone back for years - too full of themselves).  The menu, as you say, is the chef continuing to try things and it looks like something that would also be hit or miss for me.  With prices considerably higher than I'd like (but still in the NBC "we can charge for it" range).

You'll have to go several times & report back that you continue to like it before I'll venture forth.  The chef was at Vinegar Hill during a stint where I found the food uneven (the place I liked even less & haven't gone back for years - too full of themselves).  The menu, as you say, is the chef continuing to try things and it looks like something that would also be hit or miss for me.  With prices considerably higher than I'd like (but still in the NBC "we can charge for it" range).

Note that service is included.

i have to head on over and at least get a few drinks with Billy the bartender.. He is a great dude.. A couple of my regulars went to Faun and enjoyed themselves.

Yeah, I forgot to mention that service is included.  Let's keep that spreading.

If ever there was a place that should only be open in the afternoon . . .

They could open a separate place open only for breakfast, called Prelude.

Well, he did talk about them as much as he talked about you.

Sneak: I knew I could count on you.

Oops.  I forgot the Comp Disclosure (edited into my write-up above).

I ate here last week and mostly agree with what sneak said above. one of the pasta dishes, which had milk braised pork and really nice homemade pasta, was actually pretty close to an actual italian dish but I agree that the majority of the food is really market driven american food with italian touches. I'd also say that at least half the food was pretty boring, my beef came with spinach and horseradish, the pasta dishes were both pretty straight forward, as was the strawberry and arugula salad my wife had as an antipasto. I liked the crab with the frier pepper more than anything else we had.

I was also struck by how adult the restaurant was, there were no other children there and if two is a trend this place and olmstead are a good sign for prospect heights dining.

unfortunately my wife (oddly) preferred this to olmstead, which should help keep the average weight at olmstead down. the contrast between the I think sous vide hake at faun and the nicely grilled piece I had at olmstead was pretty stark.

I was happy with the wines by the glass, especially the brown sparkling wine from greece.

service was really terrific, much better than the neighborhood average.

The three of us went to Faun last night...

We started with the octopus. the octopus was cooked very well.  There were lemon rinds and caper berries.. A very small portion but, visually beautiful. 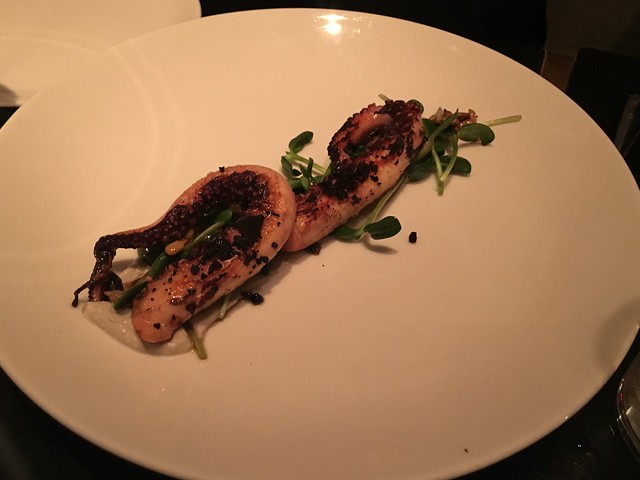 We moved on to the Blue Crab stuffed in a pepper with what I believe was mayo and celery.. Served on a saffron aioli.  Miss A liked this dish, i feel like the fried and two mayos were a bit heavy for me.. I also think the octopus would have worked on this dish really nicely. 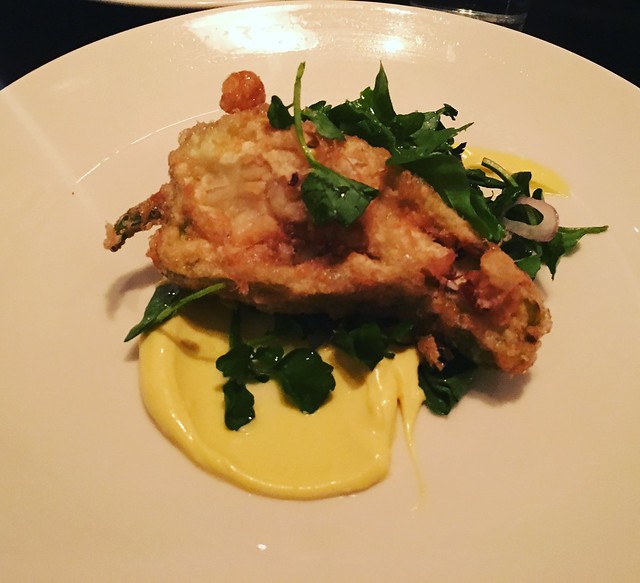 The pastas here are really nice.. Cooked perfectly, they also have an extruder which will make for fun stuff I am sure down the road: We ordered three of the four pastas.

Pasta with a pork ragu: 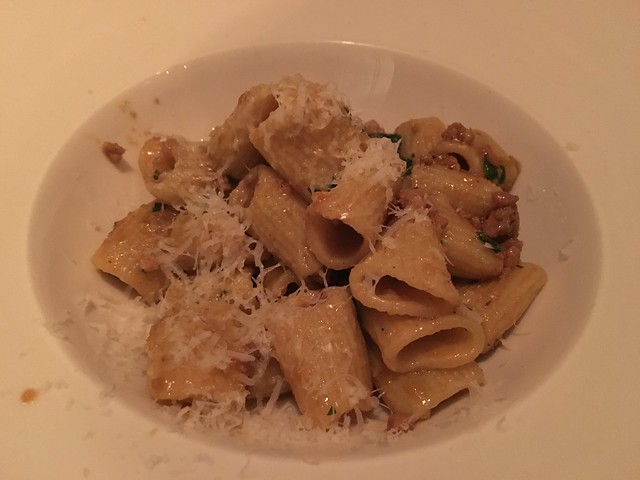 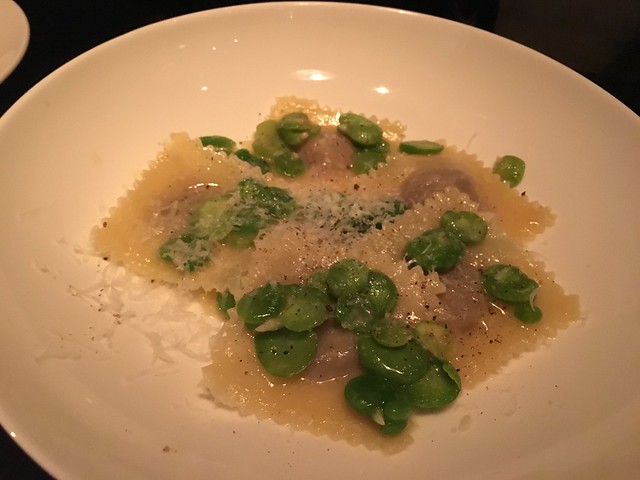 The most visually stunning, pasta sheets with sage leaves pressed in, served over chunks of sous vide butternut squash (perfectly cooked) and stracciatella.  There were also toasted pumpkin seeds that were perfectly toasted..  My only complaint, i would have added an acid somewhere.. From balsamic, to apple vinegar in the poaching bag with the squash, to what i like to do with my butternut squash pasta, some apple match sticks. Like a tart granny smith. 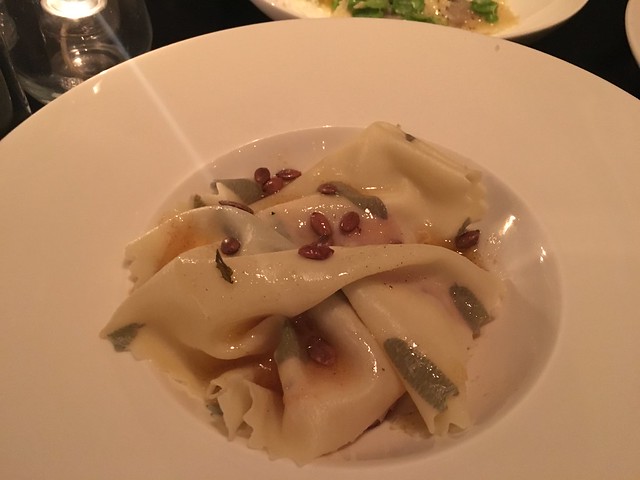 We were going to add the tile fish to our order as we still had room but, were informed the fish was cooked in a water bath..There was a 120 dollar steak for two that I pray to go is not cooked sous vide and there were pork ribs that might actually work sous vide..

No cocktails as our buddy wasn't there.   Place is grown up.. I wish them a lot of luck..

Also tagged with one or more of these keywords: Prospect Heights, Vanderbilt Ave., Brooklyn