31 replies to this topic

Maybe if youre Bjork.

It's at 54 Laugavegur Street (the main street in downtown). As you're walking toward the Music Palace it's on the left side about 1/2 mile away. Just found the name - Svarta Kaffio.

It's at 54 Laugavegur Street (the main street in downtown). As you're walking toward the Music Palace it's on the left side about 1/2 mile away. Just found the name - Svarta Kaffio.

Thanks! My airbnb is just down the street.

This is the summer of Iceland. I have one friend who was there last week and another who is there now.

Me too. She goes specifically and mostly to ride Icelandic horses, which are evidently beautiful creatures to ride.

Yes they are and very safe - they can't run well.

So far I've made it to Svarta Kaffid, which Rich describes perfectly: No menu, no prices, choose between two soups- yesterday was either a traditional Icelandic Lamb soup, where the lamb is a flavoring, not necessarily the star, so don't expect heaps of meat. There were plenty of root vegetables, and the soup base was slightly creamy. The other choice was Leek and Potato, which I didn't get.  Soups are served in a bowl of hollowed our brown bread- very filling. I had a draft beer with it, which came out to be around $28 usd. I'm trying to get used to the sticker shock...  At some restaurants, Like Icelandic Street Food, they give you refills- I don't think that's the case here, as they looked really confused when one North American asked for more. They gave it to them, though.

Tomorrow I leave for an adventure around Western Iceland for several days- especially the Snaefellness Penninsula. Over the weekend I've booked at a restaurant called Viðvík (I just learned that the 3rd letter there is anglicized to a "d". not an "o", which has changed my directions seeking life) in Hellisandur. If you haven't heard of this- it's Mouthfuls Worthy from what I can tell. I'll report back.


If were talking those danish hot dogs* with the crispy onions and pickle slices theyre not bad for one meal or two.

*Granted my tolerance for encased meats has due to situational effects become rather high...

Not accounting for sound changes, that symbol is actually an eth which is a voiced dental fricative, or a sound like the "hard" "th" sound in "the" or "that". I can understand why they might transliterate it as "d", but if you use an eth in your language, you may as well use it in Icelandic, too!

And US$28 for soup and a beer? ouch! While you're there are you taking advantage of that tour thing for tourists? It's only for those who fly Icelandair, and maybe just for those with a stopover and not a longer stay, but no harm trying if you're there and flew on Icelandair!

Because so many of its customers are passing through Iceland on flights between North America and Europe, this year the airline started a first-of-its-kind program called Stopover Buddy, encouraging them to explore the country. Passengers who stop for a visit of up to a week, en route to another destination, can be paired with airline employees eager to show off the places they love. Travelers who participate get a buddy who is guide, driver and local expert. For the most part, the program is free to passengers. Travelers pay for their own meals and admission to sites and events, and Icelandair picks up the expenses of the buddy, who is also being paid for the day by the airline.

2. One of my subordinate minions, okay team members, went to Reykjavik in the spring, and failed to bring back dried puffin for me. Or canned puffin. I was very disappointed. (She did show up with some edible "Mary Jane" product.) 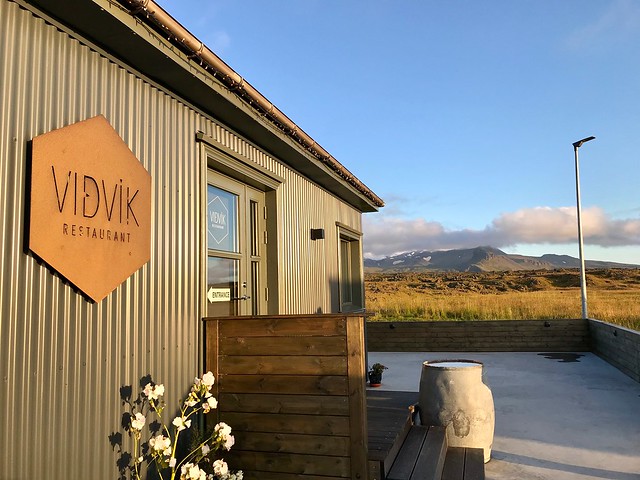 It's worthy of the praise it gets. Last night I had a glorious dinner, and I hope that you'll all immediately get to Iceland and eat here. The chef is from here, trained and worked in Reykjavik, and has moved home and opened this little gem. His girlfriend was my charming server. 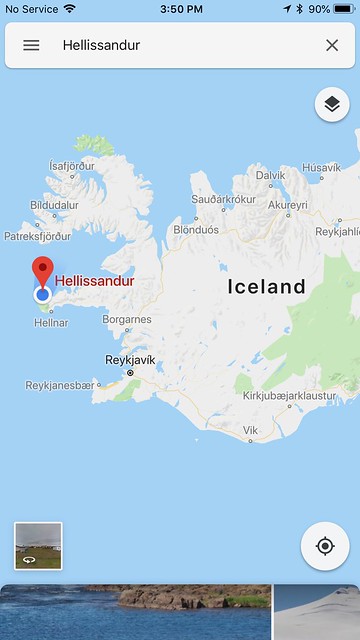 The drive from the ring road is otherworldly- I stopped every 5 or 10 minutes to take pictures. I can add more if you wish. But this post is about Vidvik. 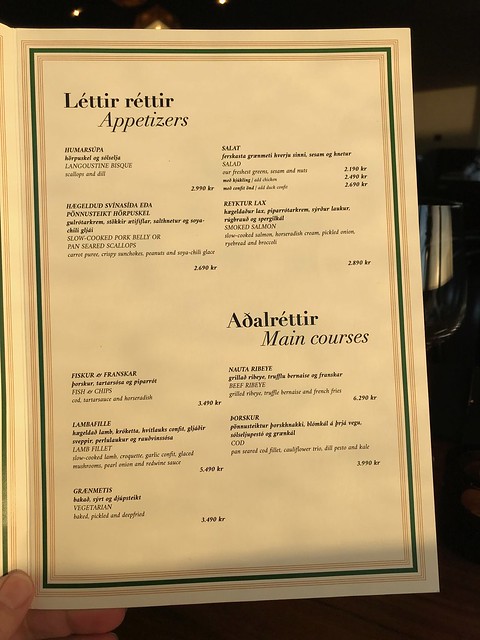 Amuse of cod crudo with a little sesame and soy- very nice. 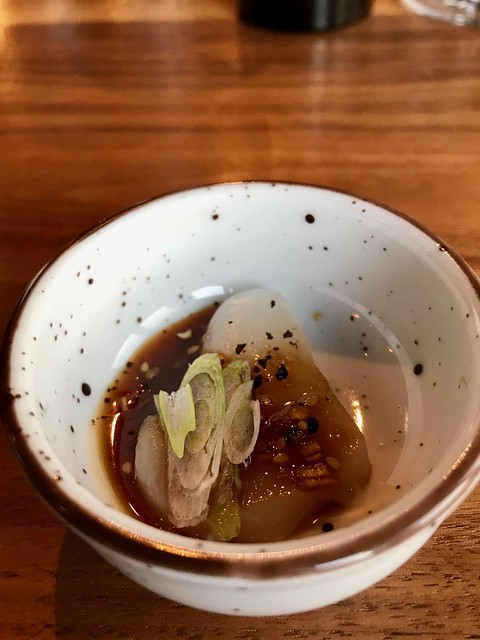 The cod. The cauliflower 3 ways was puree, roasted, and thinly sliced and pickled, which was a wonderful little hit of acid. The green oil is dill, and the pesto is the dill that's left from making the oil, mixed with pine nuts. Sounds like too much dill, but it really wasn't, and I'm not a huge fan of dill usually. The crisped kale was salty and added a nice crunchy element to the dish. 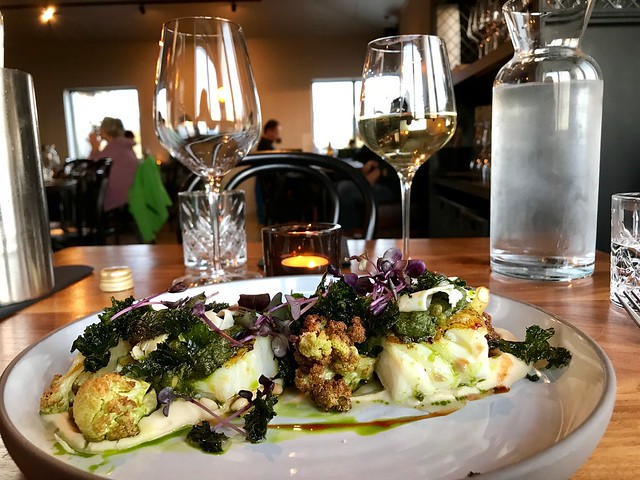 This was marvelous, and I savored every morsel.The cod was where some would say *just* undercooked, which means to me a little glassy and perfect. I also indulged in a bottle of wine. In Iceland the state liquor stores are opened for very truncated hours in the countryside, and I really wanted to sit on my deck later, watch the sunset and seals and have a glass. The law with restaurants is that they have to open the bottle on premises, but you can take the bottle with you.

Since this was my splurge, after dinner I had a Camus VSOP. 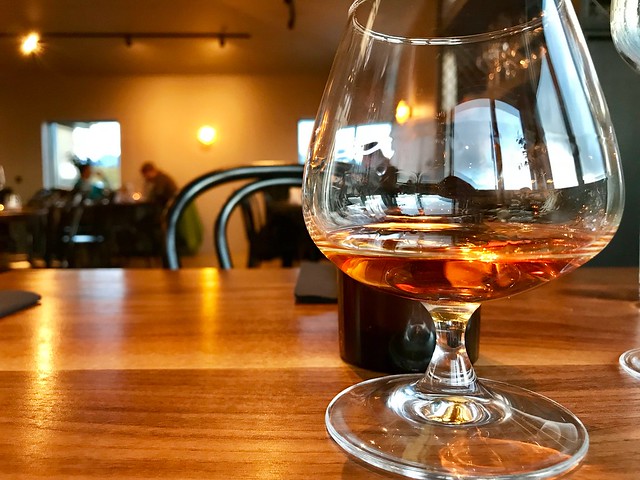 Then walked the 6 minutes back to my seaside triplex. Hellisandur has dubbed itself the "street art capital of Iceland", and there's cool stuff everywhere. This first one represents the women waiting for the fishermen to return. 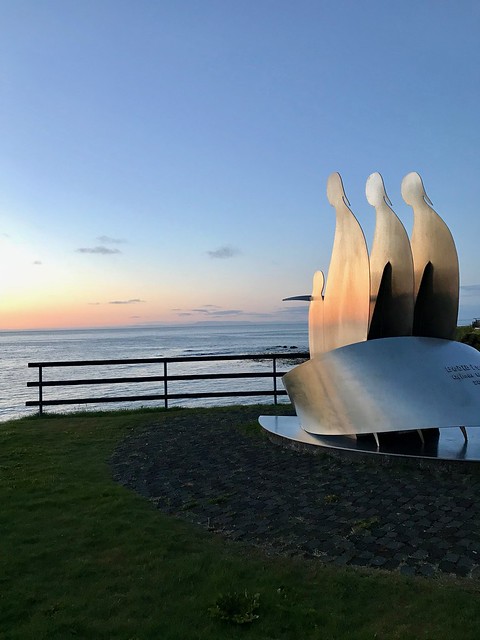 and this is just fun. 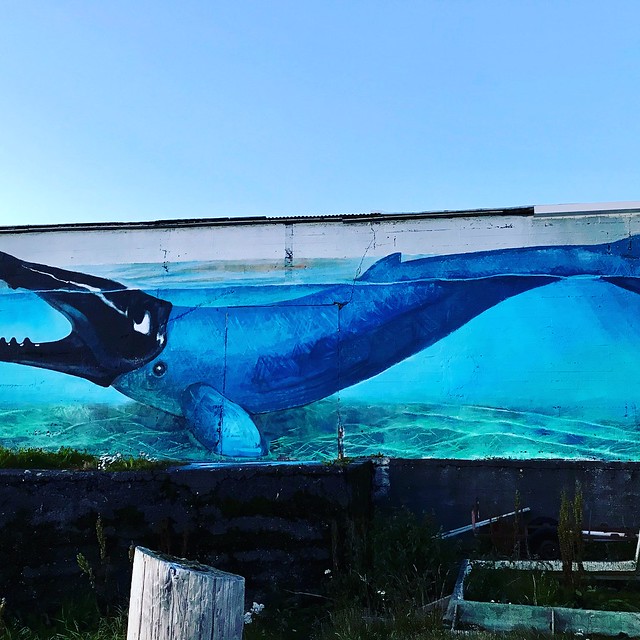 and enjoyed the sunset, pleasantly tipsy, listening to the surf, birds and seals. 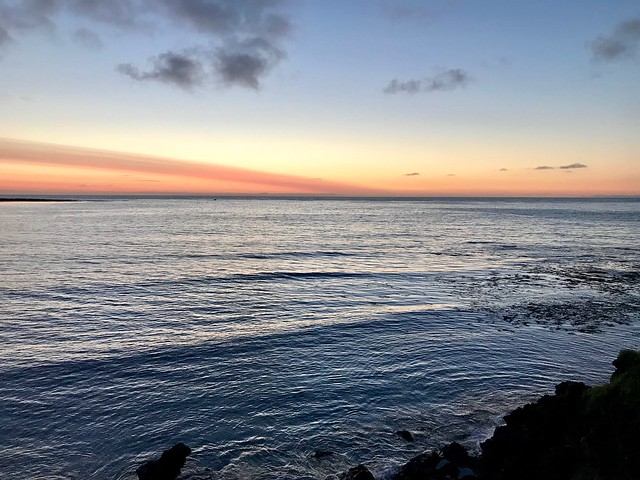 Am I just not getting how expensive this place is or is 1:10 conversion off by a bit?

Certainly not cheap, but not crazy expensive either...

Back to Italy and Elsewhere in Europe