8 replies to this topic

The much praised and celebrated Mexican Restaurant on 4th ave in Sunset Park... It's written about in all the major foodie publications. Apparently it was once a taco truck and now it's a restaurant that doesn't serve beer.  What can I say, we have a certain routine for an early mexican lunch on weekends... And this usually revolves around my favorite mexican place, mexican 2000.  But, i was meeting my mother and she was heading in through Shaolin and figured this would be an easy thing for them..

Anyway, i wasn't blown away... I mean, i wont discredit a whole place from a few items..  But, i didn't leave this place thinking it's one of the great Mexican restaurants in Brooklyn.. If it were down the street, i would still go to my local spot but, but stop in here to round out my menu choices.. Its a very homey place and large plates of food, there has to be a specialty of the house. . We had the sopes.. The sopes with cecina.. They were nice and sturdy and crispy masa boats.. Like just a good masa boat.. The cecina was also good.. this was my favorite thing 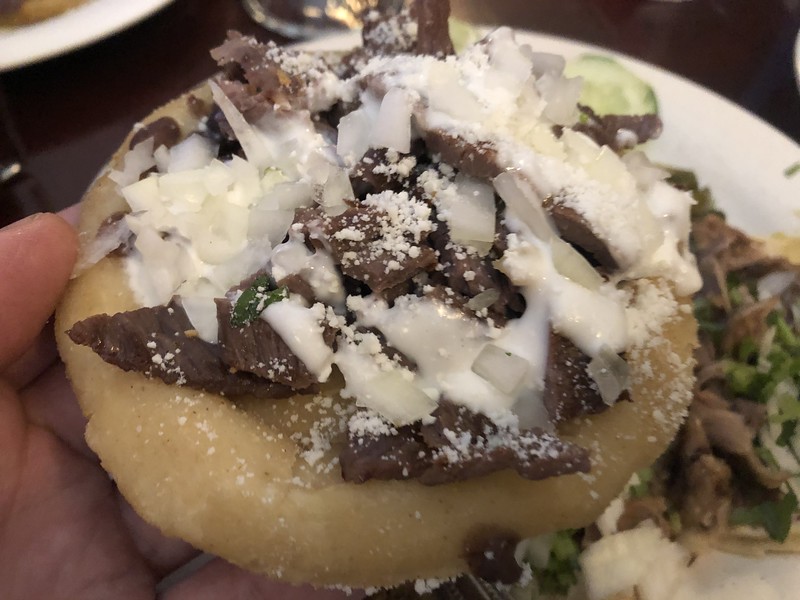 the tacos we ordered we are similar in texture, nothing with any crunch.. all stewed meats.. there was tongue, head and goat... I took a bite of some,   My mother of all people unknowingly ate all the tacos.. We never told her what she was eating. Pondering things loudly like "don't you find all mexican food to be the same"   Or making connections such as "speaking of chucky cheeses"  and then going into large discussion about children with HIV and just so much more... but, more interesting than that, i guess one has to define discussion.. As there is a fine line between what a discussion is and what being spoken at is.. But, yes, the tacos, yes..   You know, just a fun a light lunch. Meanwhile, she loved the goat taco that she would not have loved had she known it was goat.  And this was like a goaty funky taco.. this brought some levity at least to me. The beer from the bodega next door helped as well. 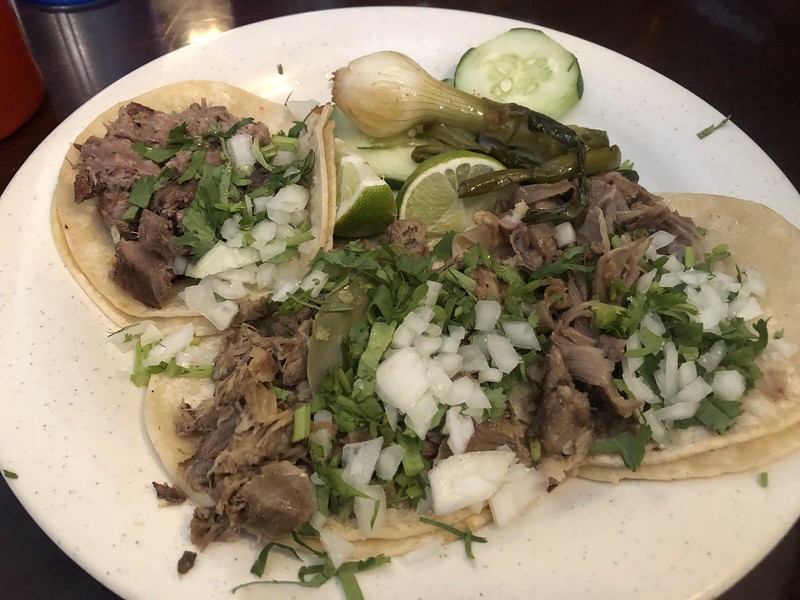 Finally, the second biggest disappointment at the table, outside of this guy,  were the chilquiles.. I didn't like the texture of the tortilla.. i usually like the tortillas in that half crunchy half soaked state, almost like a good pan fried noodle but, these were just tortillas that were not fried but, just placed in sauce.. they were thick... the sauce was good, it had the epazote sour and in a tomatillo based green sauce but, yeh, the tortillas were a misfire for me..  black beans, were good.. i like avocado leaves in my black beans but, ok, not bad. 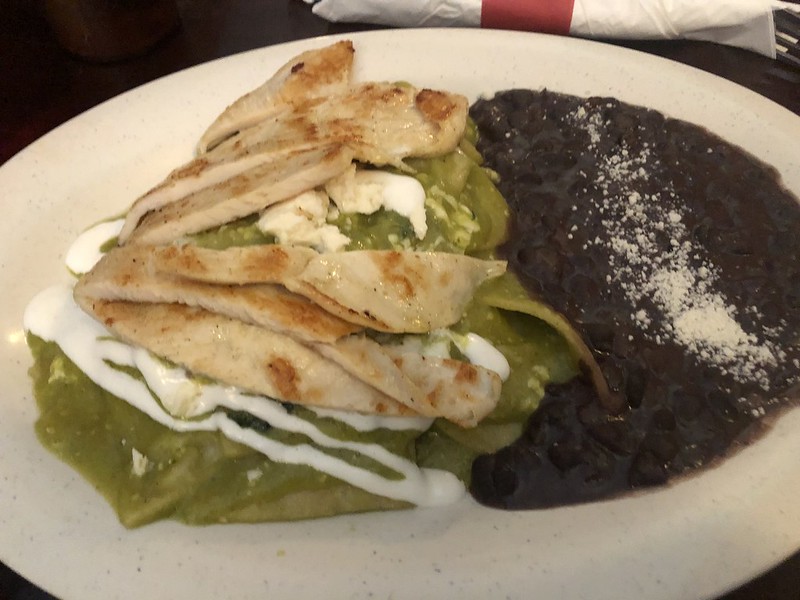 there were families and plates of food and well, yeh, would love to hear other people's experiences here.

Looks like poorly executed typical central mexican (puebla? jalisco? the chilaquiles seem guadalajaran) food - I think the guy who opened it left a long time ago so it wouldn't surprise me if the praise is based on the food as it was five years ago.

Looks like poorly executed typical central mexican (puebla? jalisco? the chilaquiles seem guadalajaran) food - I think the guy who opened it left a long time ago so it wouldn't surprise me if the praise is based on the food as it was five years ago.

have flat top, will travel.

I haven't been to the restaurant, just the truck (parked down the block from Melody Lanes iirc), but the only thing that really impressed me was the range of meats/cuts offered. The execution was fine but unmemorable.

Daniel, what do you get at Mexico 2000? It looks pretty run-of-the-mill from a quick Googlin'.

I get two things and they are worth going for... Pozole (only available on weekends) and the chilaquiles.. It's the one in the bodega, not the restaurant next door.. Their barbacoa on the weekends use to be the best but, they are not getting it from a different place..  But, the chilaquiles are my ideal version.

i mean, look at this thing: 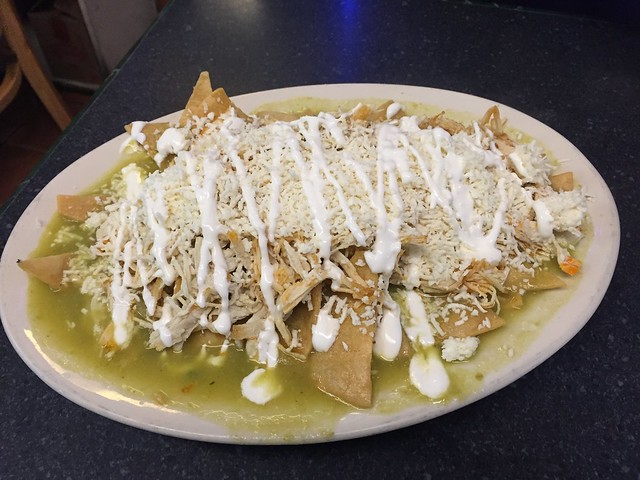 i particularly like how they shred the chicken on the chilaquiles too.. Jax's nanny and a few other mexican women I have seen cook in my home, take their chicken and simply boil it in super salty water before shredding... Which I suspect they do something like that at Mexico 2g.. They shred and then like press on the flat top until it gets the little jags crispy and brown and bits and well, it's hard to get excited about chicken breast but, they make a case.

and the sope, that edge on the top one, you know it's texture is worlds apart, not to mention the precision and skill that the above person has over that sloppy one. on the bottom..

I'm a fan, but admittedly, they're not world-changing. It's all very traditional, straighforward... was just done better with deeper flavors than many others in the area for awhile. The game has risen out there, though, so they're not necessarily the standard-bearer anymore. At the spin-off, Tacos el Bronquito (and maybe at the main restaurant now) they offer fresh-pressed tortillas for an extra buck. Worth it.

They still have the truck, up on 5th Ave. It's pretty famous - mainly for being open til 6AM. In the warmer months it's basically a full-on all-night party,  people hanging out in lawn chairs with six-packs of Modelo. Local restaurant workers getting off their shifts, MTA bus employees on their way to start their shifts, whole families sometimes. Plus it's fun to grab a few tacos and hit the bar at Melody Lanes with the 800-year-old bartender.

They are Pueblan, like nearly every other place in SP. I would not call it poorly executed. It's just... simple. You're there for (mostly) braised meat on a plate, or in a tortilla. There isn't really anything to execute.

I believe it's still owned and operated by the Tapias, the original owners. Two brothers, IIRC. Not sure if both are still there, or maybe one's retired, but they were involved enough that they were both named in a lawsuit by a former employee a couple years ago.

I do think there are places doing some things better in the neighborhood now. Mexico En La Piel is a great joint with unstable hours, especially in the evening - they just seem to close when they close. But they hired on the old quesadillero (is that a word? it is now) from a place that was famous for their fresh masa quesadillas, and they're great.

I am willing to trust you but, i don't think alicia can take the disappointment. i may have to wait a month.

I am willing to trust you but, i don't think alicia can take the disappointment. i may have to wait a month.

(Caveat: not my picture, just yanked it from yelp)

But look at these: 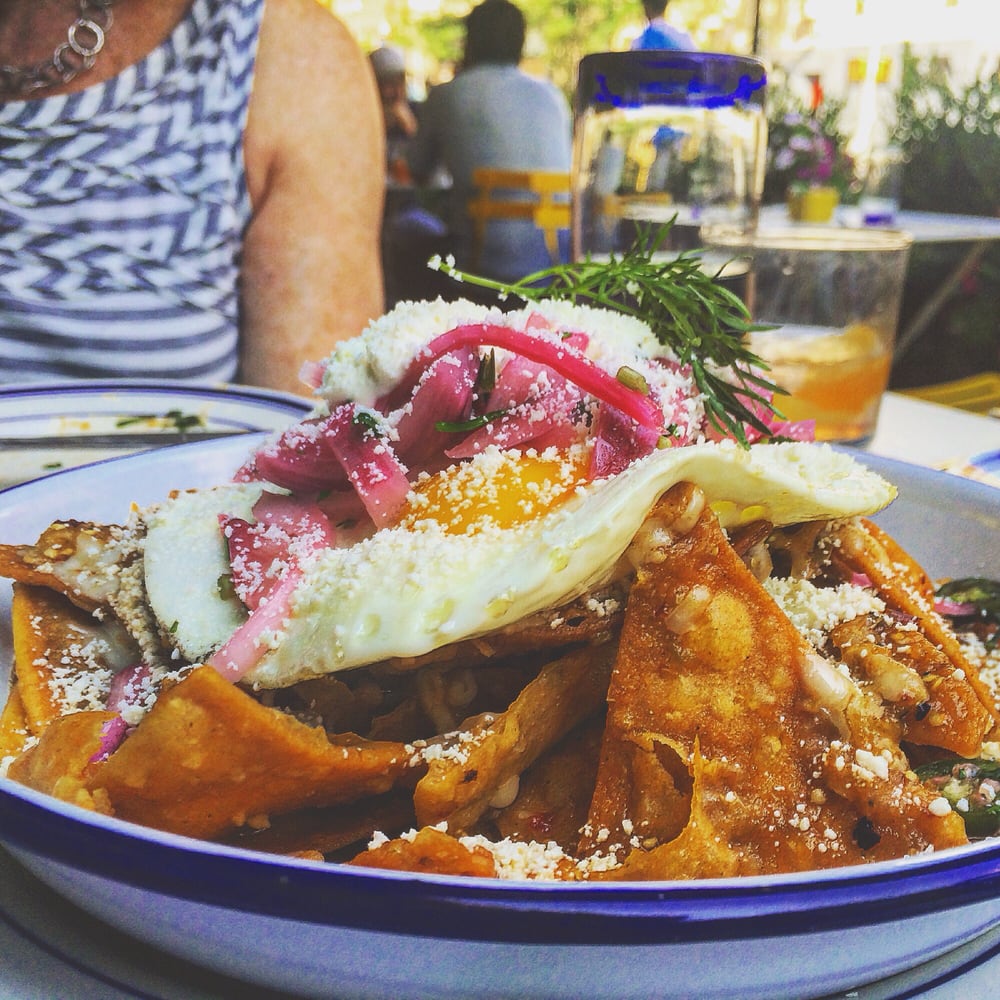 Not swimming in sauce, but perfectly soggy-yet-still-crispy. They don't do chicken, but the runny eggs (and optional cecina) make up for it. And the pickled onions are like the cherry on top. My perfect hangover dish (plus their brunch servings will feed an army)

Good pozole too, though it comes and goes from the brunch menu seemingly randomly.