2 replies to this topic

New Diner-esque Fusioney Thai Place opened by the Uncle Boons Folks.. .We arrived at 11 am on a Sunday with a 6 top... I think this helped us as the largest table that I noticed was a 6 top.   So, as we were a true 6, the wait was about 30 minutes. By the time we left around 1, there was a 2 hour wait for a two top.    We ordered a large amount of the menu.. I can say, overall the food was good..

We tried some of the tradtional food and we tried some of the fusion food.. I would say, the most successful thing we had was a fusion item..  This was a sausage egg and cheese on a roti..  It was served with a spicy dipping sauce and it was really, really good.. 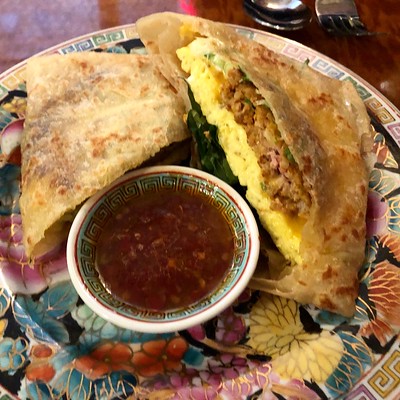 Nam Tok was pretty straight forward.. I have had better, it was certainly good but, yeh, I didn;'t notice any fusion 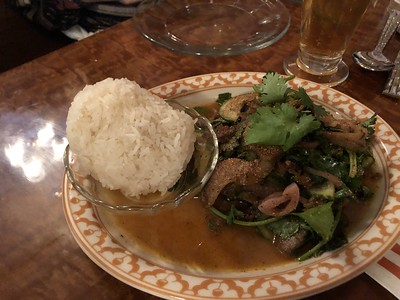 The romaine salad with a spicy coconut dressing with avocado and added fried chicken was fusion.. It was their take on a caesar and it was well, not as good as a caesar. 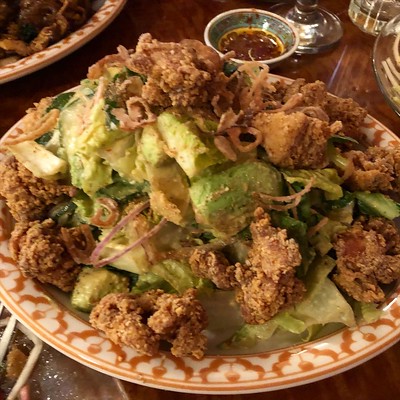 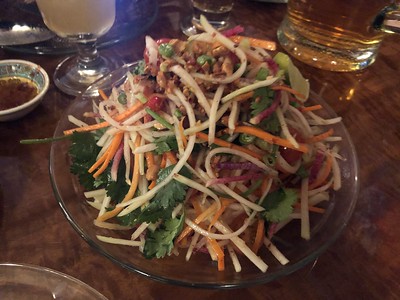 We tried both their pad thai and their pad se ew (sp?)  All were ok.. I have had better and more interesting and well, are these ever really that good.. I mean, pad see ew is often good and spicy.. But, yeh, it was not too exciting, the noodle a little coagulated.

Spicy chopped chicken liver with pineapple and shallots maybe?  It was chopped liver, i was hoping it was going to be hot chopped livers.. But, it was served cold and well, with other spicy items on the table, the spice was kind of lost.  THe addition of pineapple kind of made the whole thing taste like durian to me.. It had that livery taste and then the sweet pinapple.. The roti didn't add much.. It was just ok.. I feel like that kind of crowbarred a few things in the menu in attempt to be fusion.. I don't know, the egg sandwich was the best thing I ate and it was the first thing I ate.. 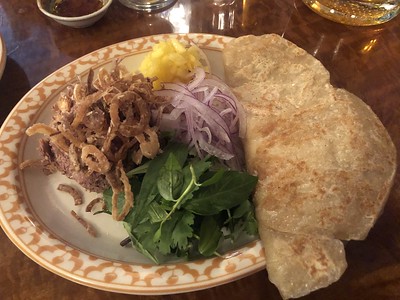 we also had to get the babka french toast because, you know, babka french toast.. They made their own babka and added a thai ice tea flavor with in the layers.. They served with a super salty condensed milk.. The babka tasted like tea, it was interesting 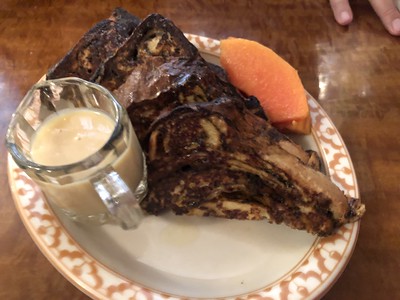 I love the space, it's comfortable and cool and well, they will only get better I am sure..  There's more things to try, I would go back.

What about the tiny stool seats?

What about the tiny stool seats?


We were sitting in one the 6 person benches. If I had to make a suggestion, go as a group of six. I did look over at one point from my comfortable spot and stared at the curved backs of a few guys. They were all younger men and I was thinking how happy my back was not doing what theirs were doing.