That works because you can just go directly up to the bar and take the first seat that opens up.

"once the penis came out, there was discussions as to why we didn't order the testicles" - Daniel describing a meal in China

I guess it never happened.

That works because you can just go directly up to the bar and take the first seat that opens up.

Sixty to ninety minutes wait. 45 minutes at Minetta even after being recognized.

I'm really happy with all the help not eating at Lupa though.

Times have changed. Friday and Saturday may be more difficult, but 8pm tables at Lupa are easy to pick up on Open Table on any other night.

ETA: And I am talking day of, or a couple of days out.

Times have changed. Friday and Saturday may be more difficult, but 8pm tables at Lupa are easy to pick up on Open Table on any other night.

ETA: And I am talking day of, or a couple of days out.

Mm, used to be really hard to do that.

Not the greatest of pix -- I really wanted a table with access to natural light but such was not to be... 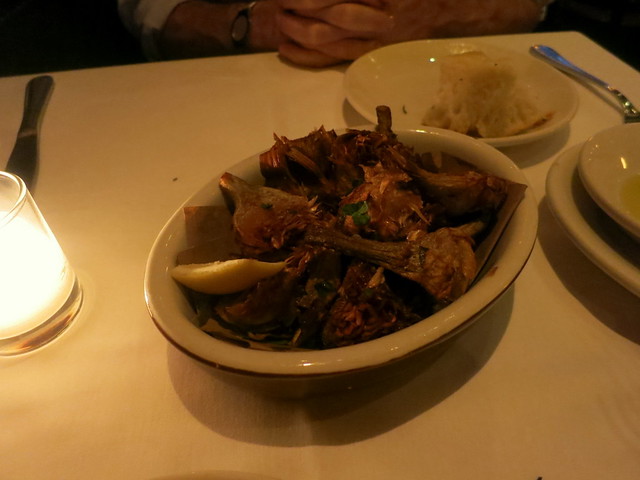 fried artichokes with chiles and mint 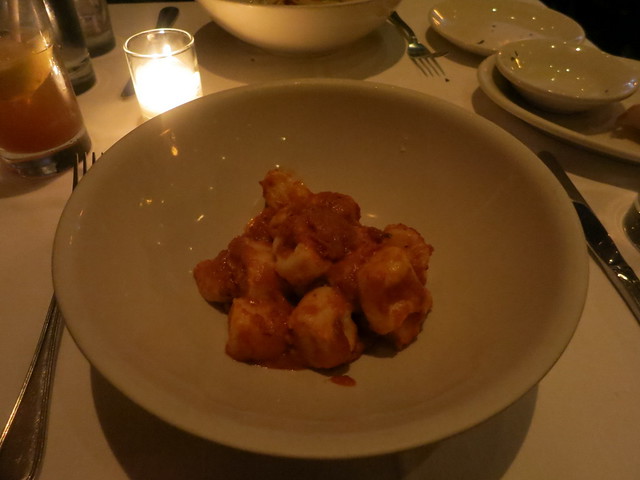 potato gnocchi with sausage and fennel 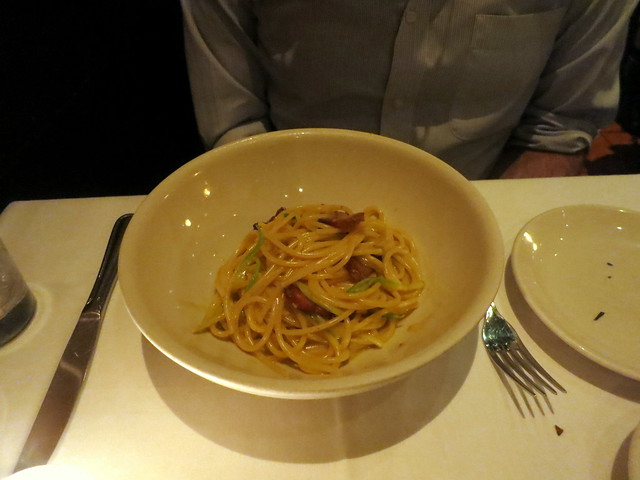 B pronounced this "excellent" 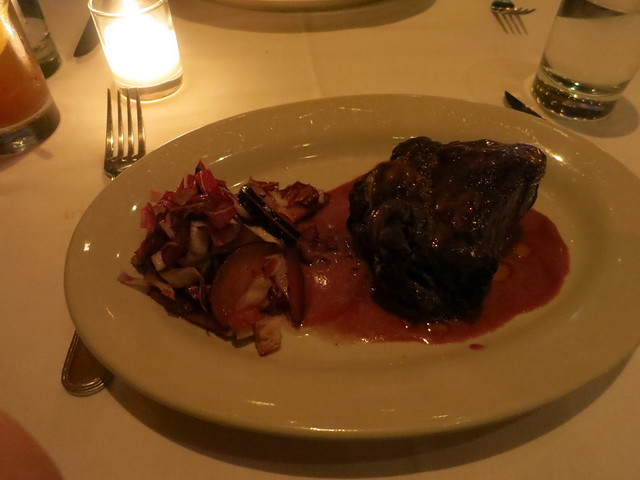 I am normally not a fan of secondi in Italian restaurants, but this was pretty good. The pork was meltingly tender. 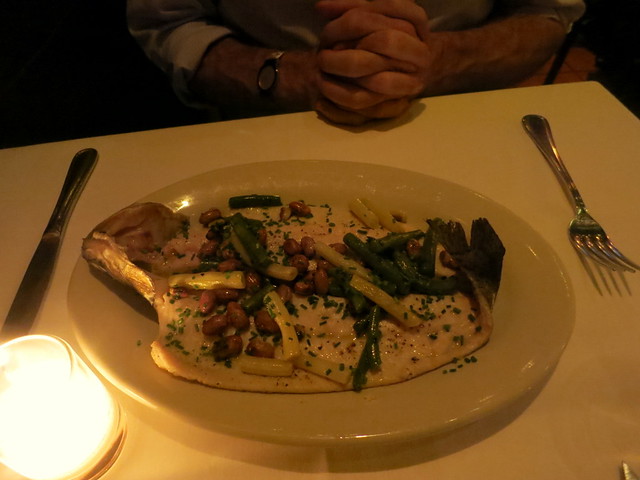 
we decided to skip dessert and have it at home instead.

Popped in last night just as a deuce was departing the bar, so Sig Eater and I snatched up the pair of seats - this was like 8 PM, on a Friday!

You know what? At least as good as it ever was.  The affetatti piccolo is always a nice starter for 2, with plenty of salumi and that fabulous warm head cheese.  Not a skimpy platter at all for $20.

Followed that with an excellent baccala salad.

Caccio e pepe for the wife, and carbonara for me. $15 and $16 respectively - kind of a bargain in this day and age, and we felt the portions might've gotten a smidge bigger, on both the salad and pasta.

A couple of glasses of wine and we were out of their for under $100, before tip...kinda nice after boozing it up.

Had lunch here yesterday..I am going to guess and say, I haven't been here in 10 years.. One thing I didn't remember was, how stuffy it was.. It was like overly formal and annoying.. We arrived to an empty restaurant around 12:30. Maybe 5 tables, they sat us right next to someone... We made a rezi, even that process was annoying.. Girl on the phone was again, overly formal, awkward and uncomfortable.. We arrive, it's empty, she keeps us at the hostess stand, i am holding a baby.  I had specifically said, we are two with a baby and need a highchair.. i had called 30 minutes early, we stood in the door way for 5 minutes holding a two year old, it seemed like 20..

Some how, they managed to recreate the feeling of Cafe Boulud on the UES.  And that is not a good thing.  I don't know, it feels soulless.. Compared to Carbone across the street which is cool and welcoming and so warm, this place has a bread stick up it's ....   Funny as the two people sitting next to us, who were perhaps the two waspiest people I have seen since being at Cafe Boulud, were regulars. They sat silently scraping their plates, until the waiter came over.. They spoke about the old staff, they said they were like one of the very few regulars who use to come.. The waiter even said, we have very few regulars, he attributed it to young kids going somewhere else.. I started to feel bad for the place..  A place without regulars, that's not a good sign is it?

Service was not the greatest.. we waited for like 10 minutes with our  food in front of us before the wine arrived..  The appetizer was a salt cured and then citrus cured sardine resting a top a romesco sauce.. It reminded me of something at Casa Mono but, it would have been better..

We moved on to pasta.. These were fantastic actually.. The one time I came here, i remember I got the tripe and I got the carbonara.  I remember having read the cookbook which had the recipe for the guanciale.. In the recipe, it is very thyme heavy and their guanciale at the time was very thyme heavy.. They seemed to have changed the recipe.. It was delicious.. In fact, it is one of the better ones I have had.. I really enjoyed the fact that it was not overly herbacious..

Pajata Finta.. With that awesome guanciale and tripe and they said sweetbreads but, i didn't see any.. What brought it over the top was the ricotta.. I really enjoyed this dish as did Miss A.. It was a beautiful plate of pasta.. Everything I want.. Even Miss A was so shocked about how much she enjoyed the tripe aspect as well..

Hiding under the pasta was a mound of cold ricotta.. Sneaky and delicous.. Brought the dish together. And was a nice touch for MIss A who eats pasta with her family with a bowl of ricotta passed around. 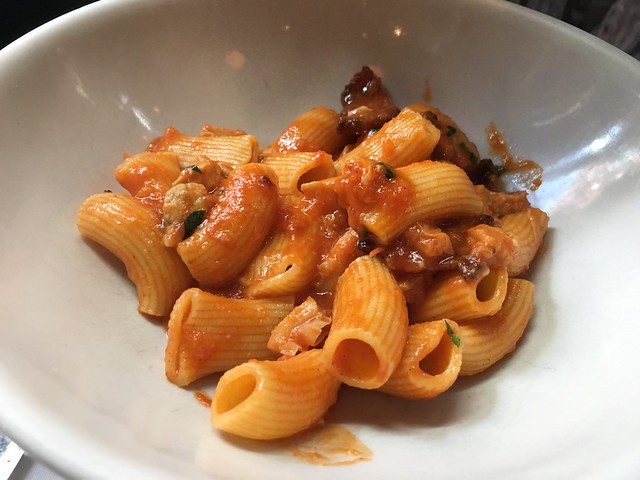 Cappelloni with lobster and green chile?  I tasted no green chile and thought the lobster could have been crab.. We both did.. it was sweeter than maine lobster and the texture was off.. i still think it may have been crab.. but, all that aside, the pasta shape was freaking gorgeous.. the sauce was light and balanced.. but, the shape, it was expertly made and held the sauce so well.. it was a thing of beauty.. 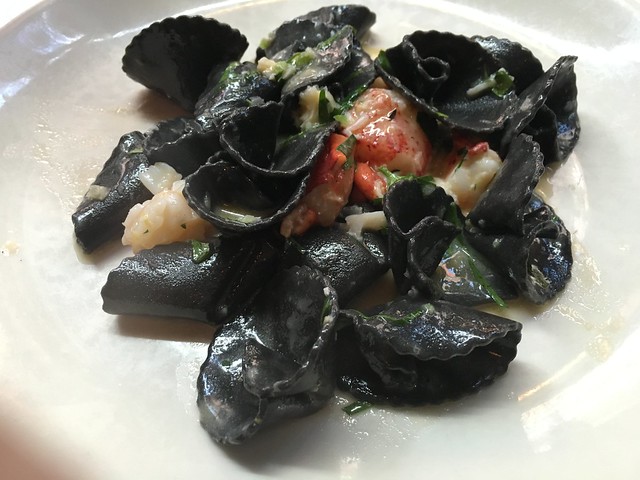 we ended with a walnut and escarole salad with what we felt was cheese from one of our cheese suppliers but, the waiter went from not knowing where the cheese was from to just saying "Tuscany" and not checking.. But, it was a great way to end... For dessert, we had a beautiful dish.. it was a goat cheese cake that was encased in a panna cotta... loved the idea and will have to steal it one day..

All in all, beautiful pasta... Spotty service and an uptight room..  Most people from what I noticed, were getting a bowl of pasta and leaving.  I don't know what it is.. Whether they are so corporate, or the management wants it to be a stuffy place, or what it is.. But, it just not a warm and fun spot..

Great report. At least Casa Mono is still atmospheric and good. Too bad Anthony Sasso moved to La Sirena, though.

Arriving on time, my party was sent to the bar to wait -- about thirty-five minutes -- for preceding diners to give up the table.  Perhaps this is standard practice at Lupa, as it always has been at Mesa Grill, because certainly nobody on the staff seemed at all concerned or embarrassed.  Since the bar fills with diners too, this means standing in a narrow gangway, impeding servers.

Also, the bar-tender seemed astonished when I asked to see the by-the-bottle wine-list rather than the wines by the glass.  He could surely see we were a party of four.

Oh one more thing, they didn't serve us an amuse, however the tables around us got one. It was a crostini and I didn't even bring it to their attention

Nothing like the old days, when Jason D. was at the front of the house.

Kinda like they've taken the soul away, even though they can still cook. I almost felt a little that way at Casa Mono recently.