everything was made of maple water.

lots of bullcrap on this thread posted by the ignorant.

some of you would be very very surprised to know about his actual views.  but frankly Billy Graham is about the last person I would expect NY'ers to know anything about.  (and if you call him a racist you really are ignorant, show me a white man born in the 1920's in NC with more progressive views on race (and friends with MLK).  seriously. -- to the post above.).

It was interesting to read the reactions to Obama's tweet by those who simply don't realize that someone with 80 years!! in public life is going to have about five cringe worthy statements.  honestly I think a lot of you are confusing him with his son (who really is everything you think he is)

a serious critique from someone knowledgeable is here: https://slate.com/ne...calculable.html

or even the Guardian obit: https://www.theguard...graham-obituary

you do realize that this is the man who said this in 1973 in Johannesburg:

Nathan, I understand that you believe you are in the best position to define and explain racism to me, because your people invented it and you feel it’s proprietary. I can assure you as a person of color who has lived in this country for over half a century, in both the north and the south, I have a great deal more first hand experience with racism than you do. I know what it is and I know a racist when I see one.
You’ve mistaken a white man being polite to a Black man as evidence of the absence of racism. Billy Graham stood fast against the very laws that would give Black citizens civil and human rights in this country. That sir, is the very definition of racism. Graham’s suggestion that Black people should beg or ask politely not to lynched in the streets, rather than insisting on the same legal protections other citizens have, is racism. I am heartened to see, at least, that you don’t dispute his anti-semitism or queer negativity.
When you've been held at gunpoint by a policeman on your way home from work or spat upon and called nigger in the streets of New York or Boston or not allowed to use a dressing room in or return clothing to a department store in North Carolina or feared for your life during a late night traffic stop on a deserted Vermont road, you'll have earned some actual credibility with me.
Your ability to google, is not more valid than my lived experience or the lived experience of millions of Black people in this country.

as racist, homophobic, anti-semites go dude was definitely in the big leagues. anti muslim, too

my high school class was small and is extremely close, we see each other frequently and people gladly host each other and classmates children when folks are traveling. Just last week a number of us attended the funeral of a classmates mom. Weeks before that I stayed with a classmate in SF as has been an annual tradition. She and her kids stay with me as they travel back and forth for the kids school travel. We've been having mini reunions every few months as people are becoming empty nesters. Another classmate secured tickets to the NMAAHC and hosted a number of us near DC for the weekend. A few have been Ambassadors and have hosted classmates overseas. This after almost no contact for the first 25 years after graduation.

A friend took me to her favorite spice shop in Albany (they have a another location in Oakland, too) and we had a blast. We created several custom blends for friends and bought too many spices for ourselves. These folks run these two shops and all the employees are owners. They love spices in an almost unnatural way. You can sniff, taste, ask way too many questions and they are still lovely. The founders are Penzey alumni and it shows.  Worth a visit if you're in the area. 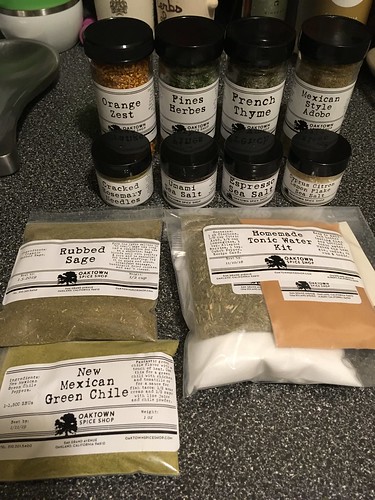 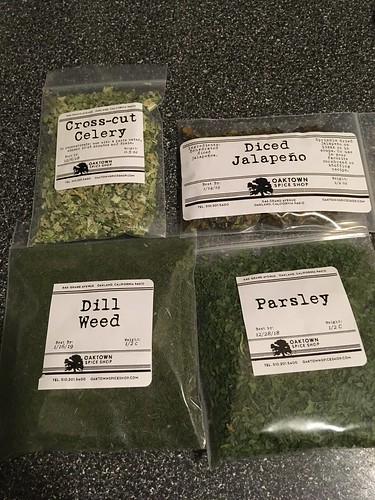 #1420239 Sexual harassment and the restaurant industry

we had an all day affair

some kind of organic heritage bird

spinach with marcona almonds and dried cherries (soaked in vodka)

In that model, HR protects powerful employees who the company sees as valuable. The randos get weeded out.

A pretty good fit to facts. Again, questions of power.

That's why the #1 salesman isn't going to be messed with. Or the guy/girl in the corner office.  Classic power asymmetry.

Weinstein's company directed billions of dollars in advertising / production / talent selection / related products.  I don't think it's a coincidence that Donna Karan was among the first to jump to his defense. Generous contributions of (the company's) dollars pay dividends when you need help.  deleted political content.

so we can talk about politicians taking bribes?

That would probably run afoul of the rules on politics (being politicians, and all).  deleted political content.  [/cynicism]

weird reasoning given the bribes were in the form of campaign contributions but i understand how supremacy works and i won't rain on the supremacy parade. carry on

sometimes the interwebs can be used for good. many thanks to a most kind and helpful mff member 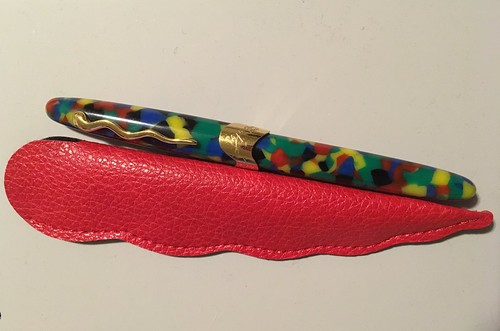 It appears that someone is unilaterally, stealthily deleting acceptable postings.

must be the russians

Waiting in an outdoor line in back of a guy smoking a very obnoxious smelling cigar who also is desperate to make conversation.

finally going back to finish viewing the NMAAHC in DC