For JewMas Eve a buddy of mine and I, after a couple rounds at Soccer Tavern watching the Rankin-Bass Santa Claus Is Comin' to Town alongside the most multi-cultural melting pot assortment of bar regulars in NYC, decided to hit up Chuan Yue, an aiming-high slightly-off-the-beaten-path Sichuan place in Sunset Park. My second visit, his first. Unfortunately on my two visits I was with friends with moderate heat palates, so I haven't yet been able to delve into any of the three-chili-pepper dishes.

That aside, it was probably better than the first visit. The menu has changed a bit (and the website hasn't been updated to reflect that) but there's a new chef running the kitchen - in fact, they "stole" the Bib-Gourmand-winning chef from Chuan Tian Xia, the place on 7th Ave. (Haven't been to CTX since he left, but there are still lines out the door most nights)

Chuan Yue is a place the foodizens shouldn't be sleeping on. While I wouldn't compare it to a DaXi, they may be the most interesting Sichuan place in Sunset at the moment. Granted, that's a small data set.

The staff are young and outgoing (two visits and I already have a mild crush on the tatted-up butchy-haircut emo girl Maitre D' / owner-I-think) and they're certainly aiming for a more "modern" vibe with the bar seating (I can't think of another traditional Chinese place with that off the top of my head), decor, and craft beer list. A couple of them might be a little over-friendly - both times, we were the only gweilo in the place, so they may have doted on us a bit more.

While there haven't been any dishes thus far where I'd say "this is the one to get" (like the pork shank at Guan Fu) everything was done very well. Favorites so far have been the conch with burnt peppers, cold sliced beef shank, dry pot frogs (bony but tasty), and the broiled oysters in "house-made spicy sauce" - which honestly seemed braised, not broiled, but whatever, they were good - and not overcooked, as I find in a lot of places. Tea-smoked duck, which we tried simply because they had run out of the more-interesting-sounding peppercorn pigeon, was also a really good rendition. Juicy with still a wee bit of crunch to the skin.

Every table seemed to have a whole grilled or braised fish on it, so maybe that's the thing to get. There were only three options the other night - tilapia (fuck that), some mid-range fish they weren't quite sure what the name of was in English that we tried to order but they'd run out of, and a larger small-mouth bass, too big for the two of us. There was also a table of what appeared to be fifteen-year-olds playing shot pong, and I'm just going to assume it wasn't with baiju and not ask any questions.

Still haven't gotten to the pork brain mapo tofu. It's a one-chili dish on the lunch menu, has two chilies on the online dinner menu, and then three chilies on the printed menu. So, not knowing what we we'd be in for, I've spared my companions.

The beer list is still better than any other place in the neighborhood while simultaneously appearing to have been put together by someone who doesn't drink beer. But points for trying.

Well, that was less than exciting.

Perfect execution for the most part.

Perhaps it was simply what we ordered, but the rumors of Japanese notes/influences/ingredients proved mostly untrue. Arguably the most Japanese thing about the meal was the clientele, which seemed to be around 80% last night.

With a couple exceptions, the plates were pretty standard Nouvelle Française. Which probably needs a new name at this point since it hasn’t been “nouvelle” in decades.

There were flashes: a lovely seaweed bread. A miso brioche, with no discernible miso but at least the attempt. Overall the breads were quite good - and I like the idea that each course has its own unique accompanying bread, rather than one bread course pre-apps.

Most everything was quite good. But not terribly interesting. At that price - a four course dinner is the same $$$$ as Le Bernardin - I kind of expect to be wowed by something.

Sure, (mostly) perfect execution. Big fucking deal. Technique is about as common as pigeons in NYC in 2019. What are you using those skills towards?

Foie gras was certainly a generous portion. Paired with sweetened fruits. Maybe a touch too sweet. Nothing we haven’t seen before. Also served a few degrees too cold. Also had a vein. Which I personally don’t particularly care about, but at their prices come on...

Cod was the standard white fish with buerre blanc & caviar we’ve seen before. Only with sake instead of white wine. Point for trying, but minus a point for it not actually being a good choice. Without the wine’s acidity to cut through it rendered the whole thing a bit meh. It could have been water, not sake in there for all it mattered. Note to chef: try that again, with a dashi instead. Something that adds a layer of flavor?

Lobster with Chestnuts and mushroom... nice enough. Had this before too. Hell, I’ve made this. The lobster wasn’t particularly sweet or luscious, but that was more the lobster’s fault than the kitchen’s. Oddly, the two seafood dishes - ostensibly “entrees” - were about half the size of the appetizers.

Meat entrees... the duck seemed like they just took the foie course, replaced the protein, and added a baby turnip. Duck and fruit. This is supposedly a signature dish? I mean, do something with it for chrissakes. Make a yuzu marmalade instead of orange. Work some green tea or soy into it. Something. Show me why you gave your restaurant a Japanese name.

Lamb was very nice, with a not-spicy harrisa for a little French-Moroccan note. Not Japanese but at least reaching to parts elsewhere.

Odd service hiccup, the SO just wanted the cheese course for dessert. Fine. They brought it out, and brought (only me) a pre-dessert to eat while she grazed. Then five minutes later they brought out my dessert. That was awkward. Why did only I get a pre-dessert? How difficult would it have been to bring two pre-desserts, then the cheese plate and my chocolate mishegas at the same time?

Speaking of wine, I do appreciate they have a small but decent half-bottle selection. Sure, the mark-up would make a certain regular poster here have a heartattack. But that’s part of the game. That said, the champers we overpaid for was unfamiliar to me, and fascinating, with notes of caramelized pineapple, and I was glad to have made its acquaintance. I’ll for sure be purchasing the lower priced yet larger sized home edition at the one local wine shop I could find it.

Were there other dishes that might have shown more Japanese influence? Maybe. I’m not locking in to a rigidly structured prix fixe again to find out though.

Would I go back if there were a la carte options? Maybe. There were things among the apps that piqued my curiosity. I noticed Benno recently switched from PF to ALC. Maybe that would work better for Shun too.

I suppose I’ll have to compare it at some point to Mifune. Perhaps a Japanese chef making French-influenced Japanese food will be more interesting than this French chef making (ostensibly) Japanese-influenced French food.

Finally popped into the new Fong On (81 Division) - the latest in the ongoing series of Post-Nom-Wah Chinese establishments taken over and ever-so-slightly modernized by the hipper tattooed descendants of the founders.

Rice cakes were also very good. Classic Chinese pastry, not too sweet, just enough to keep the matcha from tasting vegetal. They’re not gonna topple Matcha Oreos from the top of the Great Matcha Confections Hierarchy, but I don’t imagine anything ever will. $6 for what’s pictured, a pretty hefty amount. One cake is plenty, and there’s six in there. Will have to play around with incorporating the others into dishes at home, using them as a base for something.

Destination? No. It could be fun if they “chef up” the puddings a little more, maybe that’ll happen down the road. Or even get some local chefs to collaborate like Taim did with their CheFalafels that time.

Regular stop if you live in (or pass through) the neighborhood, though? For sure. 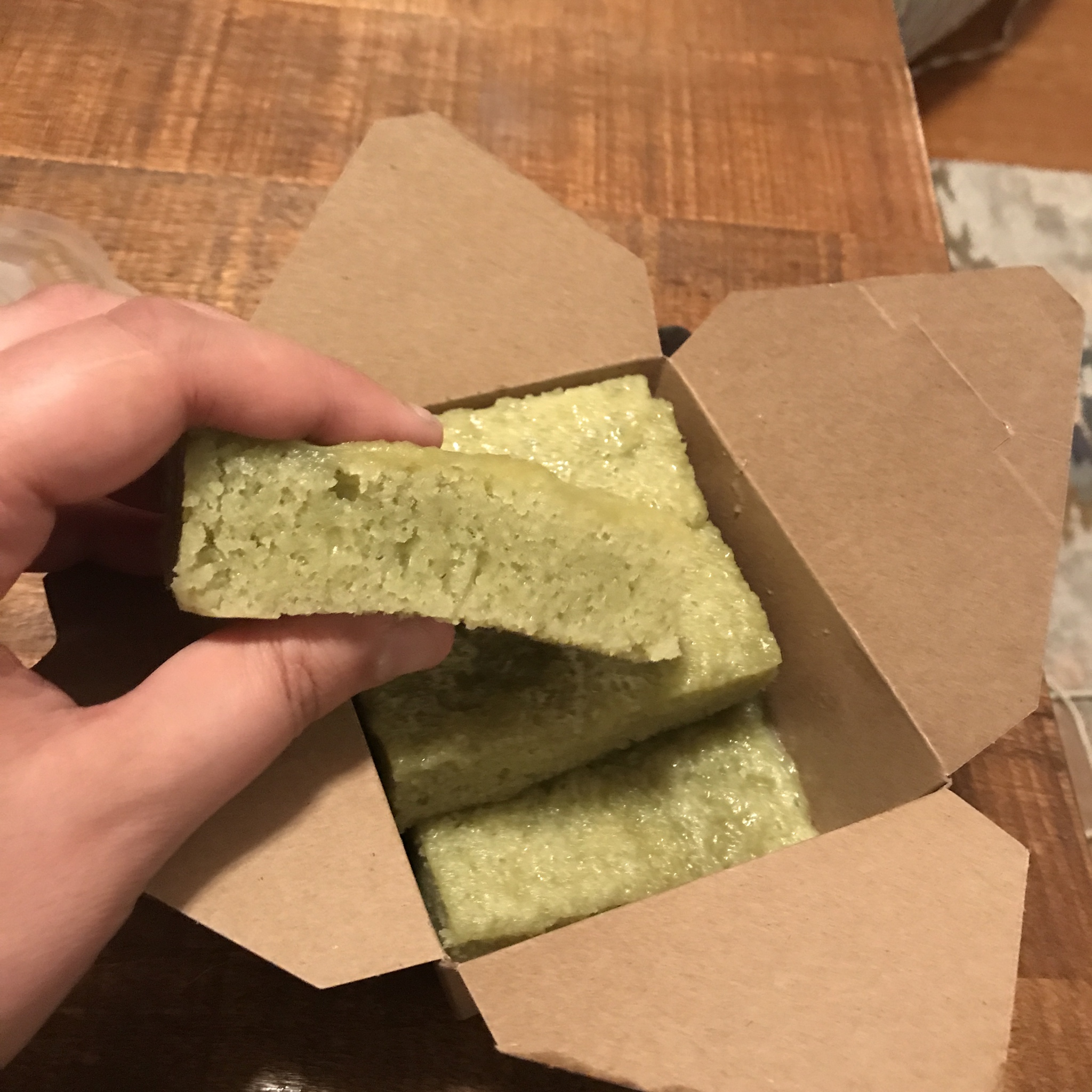 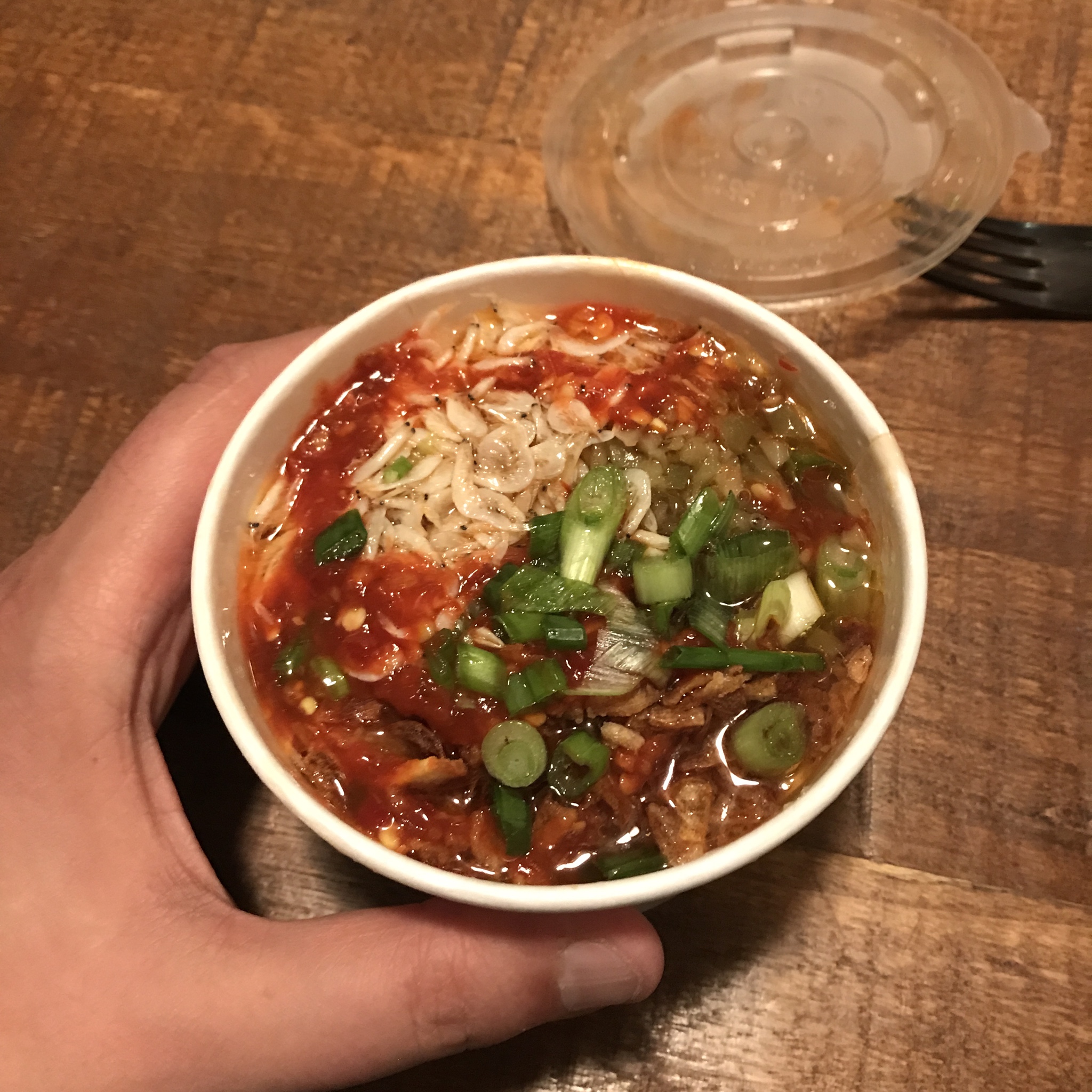